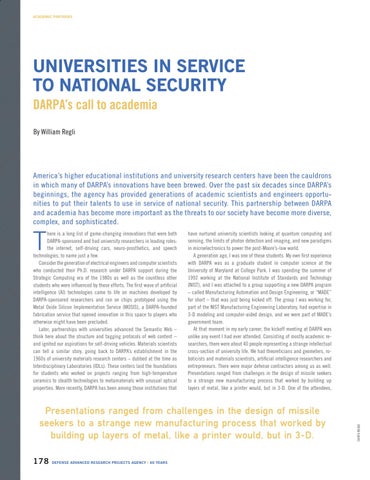 America’s higher educational institutions and university research centers have been the cauldrons in which many of DARPA’s innovations have been brewed. Over the past six decades since DARPA’s beginnings, the agency has provided generations of academic scientists and engineers opportunities to put their talents to use in service of national security. This partnership between DARPA and academia has become more important as the threats to our society have become more diverse, complex, and sophisticated. have nurtured university scientists looking at quantum computing and sensing, the limits of photon detection and imaging, and new paradigms in microelectronics to power the post-Moore’s-law world. A generation ago, I was one of these students. My own first experience with DARPA was as a graduate student in computer science at the University of Maryland at College Park. I was spending the summer of 1992 working at the National Institute of Standards and Technology (NIST), and I was attached to a group supporting a new DARPA program – called Manufacturing Automation and Design Engineering, or “MADE” for short – that was just being kicked off. The group I was working for, part of the NIST Manufacturing Engineering Laboratory, had expertise in 3-D modeling and computer-aided design, and we were part of MADE’s government team. At that moment in my early career, the kickoff meeting at DARPA was unlike any event I had ever attended. Consisting of mostly academic researchers, there were about 40 people representing a strange intellectual cross-section of university life. We had theoreticians and geometers, roboticists and materials scientists, artificial intelligence researchers and entrepreneurs. There were major defense contractors among us as well. Presentations ranged from challenges in the design of missile seekers to a strange new manufacturing process that worked by building up layers of metal, like a printer would, but in 3-D. One of the attendees,

Presentations ranged from challenges in the design of missile seekers to a strange new manufacturing process that worked by building up layers of metal, like a printer would, but in 3-D. 178

here is a long list of game-changing innovations that were both DARPA-sponsored and had university researchers in leading roles: the internet, self-driving cars, neuro-prosthetics, and speech technologies, to name just a few. Consider the generation of electrical engineers and computer scientists who conducted their Ph.D. research under DARPA support during the Strategic Computing era of the 1980s as well as the countless other students who were influenced by these efforts. The first wave of artificial intelligence (AI) technologies came to life on machines developed by DARPA-sponsored researchers and ran on chips prototyped using the Metal Oxide Silicon Implementation Service (MOSIS), a DARPA-founded fabrication service that opened innovation in this space to players who otherwise might have been precluded. Later, partnerships with universities advanced the Semantic Web – think here about the structure and tagging protocols of web content – and ignited our aspirations for self-driving vehicles. Materials scientists can tell a similar story, going back to DARPA’s establishment in the 1960s of university materials research centers – dubbed at the time as Interdisciplinary Laboratories (IDLs). These centers laid the foundations for students who worked on projects ranging from high-temperature ceramics to stealth technologies to metamaterials with unusual optical properties. More recently, DARPA has been among those institutions that