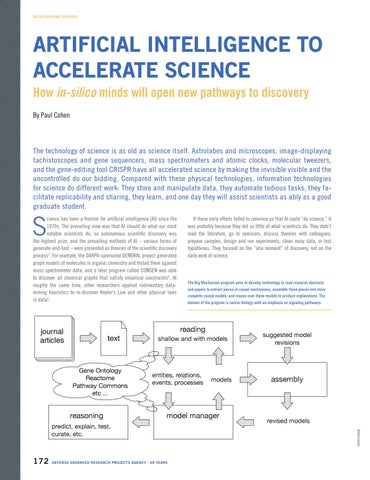 The technology of science is as old as science itself. Astrolabes and microscopes, image-displaying tachistoscopes and gene sequencers, mass spectrometers and atomic clocks, molecular tweezers, and the gene-editing tool CRISPR have all accelerated science by making the invisible visible and the uncontrolled do our bidding. Compared with these physical technologies, information technologies for science do different work: They store and manipulate data, they automate tedious tasks, they facilitate replicability and sharing, they learn, and one day they will assist scientists as ably as a good graduate student.

If these early efforts failed to convince us that AI could “do science,” it was probably because they did so little of what scientists do: They didn’t read the literature, go to seminars, discuss theories with colleagues, prepare samples, design and run experiments, clean noisy data, or test hypotheses. They focused on the “aha moment” of discovery, not on the daily work of science.

The Big Mechanism program aims to develop technology to read research abstracts and papers to extract pieces of causal mechanisms, assemble these pieces into more complete causal models, and reason over these models to produce explanations. The domain of the program is cancer biology with an emphasis on signaling pathways.

shallow and with models

cience has been a frontier for artificial intelligence (AI) since the 1970s. The prevailing view was that AI should do what our most notable scientists do, so autonomous scientific discovery was the highest prize, and the prevailing methods of AI – various forms of generate-and-test – were presented as theories of the scientific discovery process1. For example, the DARPA-sponsored DENDRAL project generated graph models of molecules in organic chemistry and tested them against mass spectrometer data, and a later program called CONGEN was able to discover all chemical graphs that satisfy empirical constraints2. At roughly the same time, other researchers applied rudimentary datamining heuristics to re-discover Kepler’s Law and other physical laws in data3.