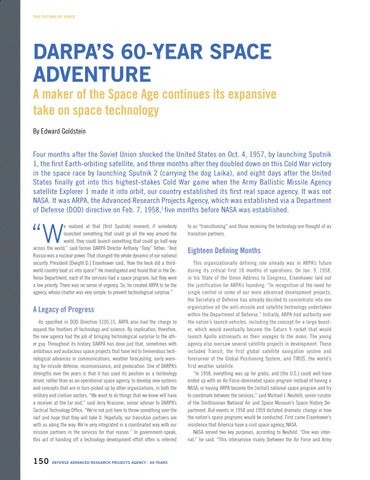 THE FUTURE OF SPACE

Four months after the Soviet Union shocked the United States on Oct. 4, 1957, by launching Sputnik 1, the first Earth-orbiting satellite, and three months after they doubled down on this Cold War victory in the space race by launching Sputnik 2 (carrying the dog Laika), and eight days after the United States finally got into this highest-stakes Cold War game when the Army Ballistic Missile Agency satellite Explorer 1 made it into orbit, our country established its first real space agency. It was not NASA. It was ARPA, the Advanced Research Projects Agency, which was established via a Department of Defense (DOD) directive on Feb. 7, 1958,1 five months before NASA was established.

e realized at that [first Sputnik] moment, if somebody launched something that could go all the way around the world, they could launch something that could go half-way across the world,” said former DARPA Director Anthony “Tony” Tether. “And Russia was a nuclear power. That changed the whole dynamic of our national security. President [Dwight D.] Eisenhower said, ‘How the heck did a thirdworld country beat us into space?’ He investigated and found that in the Defense Department, each of the services had a space program, but they were a low priority. There was no sense of urgency. So, he created ARPA to be the agency, whose charter was very simple: to prevent technological surprise.”

A Legacy of Progress As specified in DOD Directive 5105.15, ARPA also had the charge to expand the frontiers of technology and science. By implication, therefore, the new agency had the job of bringing technological surprise to the other guy. Throughout its history, DARPA has done just that, sometimes with ambitious and audacious space projects that have led to tremendous technological advances in communications, weather forecasting, early warning for missile defense, reconnaissance, and geolocation. One of DARPA’s strengths over the years is that it has used its position as a technology driver, rather than as an operational space agency, to develop new systems and concepts that are in turn picked up by other organizations, in both the military and civilian sectors. “We want to do things that we know will have a receiver at the far end,” said Jerry Krassner, senior adviser to DARPA’s Tactical Technology Office. “We’re not just here to throw something over the roof and hope that they will take it. Hopefully, our transition partners are with us along the way. We’re very integrated in a coordinated way with our mission partners in the services for that reason.” In government-speak, this act of handing off a technology development effort often is referred

to as “transitioning” and those receiving the technology are thought of as transition partners.

Eighteen Defining Months This organizationally defining role already was in ARPA’s future during its critical first 18 months of operations. On Jan. 9, 1958, in his State of the Union Address to Congress, Eisenhower laid out the justification for ARPA’s founding: “In recognition of the need for single control in some of our more advanced development projects, the Secretary of Defense has already decided to concentrate into one organization all the anti-missile and satellite technology undertaken within the Department of Defense.” Initially, ARPA had authority over the nation’s launch vehicles, including the concept for a large booster, which would eventually become the Saturn V rocket that would launch Apollo astronauts on their voyages to the moon. The young agency also oversaw several satellite projects in development. These included Transit, the first global satellite navigation system and forerunner of the Global Positioning System, and TIROS, the world’s first weather satellite. “In 1958, everything was up for grabs, and [the U.S.] could well have ended up with an Air Force-dominated space program instead of having a NASA, or having ARPA become the [initial] national space program and try to coordinate between the services,” said Michael J. Neufeld, senior curator of the Smithsonian National Air and Space Museum’s Space History Department. But events in 1958 and 1959 dictated dramatic change in how the nation’s space programs would be conducted. First came Eisenhower’s insistence that America have a civil space agency, NASA. NASA served two key purposes, according to Neufeld. “One was internal,” he said. “This interservice rivalry [between the Air Force and Army