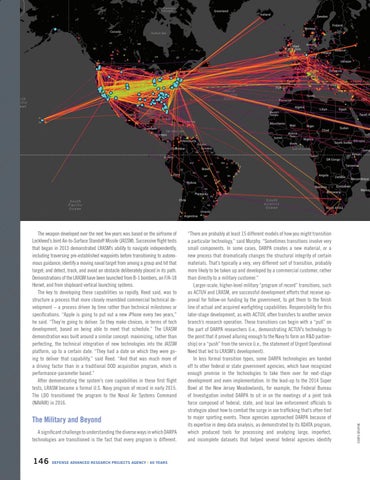 The Military and Beyond A significant challenge to understanding the diverse ways in which DARPA technologies are transitioned is the fact that every program is different.

“There are probably at least 15 different models of how you might transition a particular technology,” said Murphy. “Sometimes transitions involve very small components. In some cases, DARPA creates a new material, or a new process that dramatically changes the structural integrity of certain materials. That’s typically a very, very different sort of transition, probably more likely to be taken up and developed by a commercial customer, rather than directly to a military customer.” Larger-scale, higher-level military “program of record” transitions, such as ACTUV and LRASM, are successful development efforts that receive approval for follow-on funding by the government, to get them to the finish line of actual and acquired warfighting capabilities. Responsibility for this later-stage development, as with ACTUV, often transfers to another service branch’s research operation. These transitions can begin with a “pull” on the part of DARPA researchers (i.e., demonstrating ACTUV’s technology to the point that it proved alluring enough to the Navy to form an R&D partnership) or a “push” from the service (i.e., the statement of Urgent Operational Need that led to LRASM’s development). In less formal transition types, some DARPA technologies are handed off to other federal or state government agencies, which have recognized enough promise in the technologies to take them over for next-stage development and even implementation. In the lead-up to the 2014 Super Bowl at the New Jersey Meadowlands, for example, the Federal Bureau of Investigation invited DARPA to sit in on the meetings of a joint task force composed of federal, state, and local law enforcement officials to strategize about how to combat the surge in sex trafficking that’s often tied to major sporting events. These agencies approached DARPA because of its expertise in deep data analysis, as demonstrated by its XDATA program, which produced tools for processing and analyzing large, imperfect, and incomplete datasets that helped several federal agencies identify

The weapon developed over the next few years was based on the airframe of Lockheed’s Joint Air-to-Surface Standoff Missile (JASSM). Successive flight tests that began in 2013 demonstrated LRASM’s ability to navigate independently, including traversing pre-established waypoints before transitioning to autonomous guidance; identify a moving naval target from among a group and hit that target; and detect, track, and avoid an obstacle deliberately placed in its path. Demonstrations of the LRASM have been launched from B-1 bombers, an F/A-18 Hornet, and from shipboard vertical launching systems. The key to developing these capabilities so rapidly, Reed said, was to structure a process that more closely resembled commercial technical development – a process driven by time rather than technical milestones or specifications. “Apple is going to put out a new iPhone every two years,” he said. “They’re going to deliver. So they make choices, in terms of tech development, based on being able to meet that schedule.” The LRASM demonstration was built around a similar concept: maximizing, rather than perfecting, the technical integration of new technologies into the JASSM platform, up to a certain date. “They had a date on which they were going to deliver that capability,” said Reed. “And that was much more of a driving factor than in a traditional DOD acquisition program, which is performance-parameter based.” After demonstrating the system’s core capabilities in these first flight tests, LRASM became a formal U.S. Navy program of record in early 2015. The LDO transitioned the program to the Naval Air Systems Command (NAVAIR) in 2016.