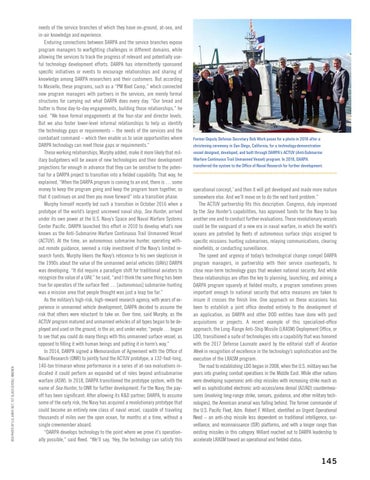 needs of the service branches of which they have on-ground, at-sea, and in-air knowledge and experience. Enduring connections between DARPA and the service branches expose program managers to warfighting challenges in different domains, while allowing the services to track the progress of relevant and potentially useful technology development efforts. DARPA has intermittently sponsored specific initiatives or events to encourage relationships and sharing of knowledge among DARPA researchers and their customers. But according to Masiello, these programs, such as a “PM Boot Camp,” which connected new program managers with partners in the services, are merely formal structures for carrying out what DARPA does every day. “Our bread and butter is those day-to-day engagements, building those relationships,” he said. “We have formal engagements at the four-star and director levels. But we also foster lower-level informal relationships to help us identify the technology gaps or requirements – the needs of the services and the combatant command – which then enable us to seize opportunities where DARPA technology can meet those gaps or requirements.” These working relationships, Murphy added, make it more likely that military budgeteers will be aware of new technologies and their development projections far enough in advance that they can be sensitive to the potential for a DARPA project to transition into a fielded capability. That way, he explained, “When the DARPA program is coming to an end, there is … some money to keep the program going and keep the program team together, so that it continues on and then you move forward” into a transition phase. Murphy himself recently led such a transition in October 2016 when a prototype of the world’s largest uncrewed naval ship, Sea Hunter, arrived under its own power at the U.S. Navy’s Space and Naval Warfare Systems Center Pacific. DARPA launched this effort in 2010 to develop what’s now known as the Anti-Submarine Warfare Continuous Trail Unmanned Vessel (ACTUV). At the time, an autonomous submarine hunter, operating without remote guidance, seemed a risky investment of the Navy’s limited research funds. Murphy likens the Navy’s reticence to his own skepticism in the 1990s about the value of the unmanned aerial vehicles (UAVs) DARPA was developing. “It did require a paradigm shift for traditional aviators to recognize the value of a UAV,” he said, “and I think the same thing has been true for operators of the surface fleet … [autonomous] submarine-hunting was a mission area that people thought was just a leap too far.” As the military’s high-risk, high-reward research agency, with years of experience in unmanned vehicle development, DARPA decided to assume the risk that others were reluctant to take on. Over time, said Murphy, as the ACTUV program matured and unmanned vehicles of all types began to be deployed and used on the ground, in the air, and under water, “people . . . began to see that you could do many things with this unmanned surface vessel, as opposed to filling it with human beings and putting it in harm’s way.” In 2014, DARPA signed a Memorandum of Agreement with the Office of Naval Research (ONR) to jointly fund the ACTUV prototype, a 132-foot-long, 140-ton trimaran whose performance in a series of at-sea evaluations indicated it could perform an expanded set of roles beyond antisubmarine warfare (ASW). In 2018, DARPA transitioned the prototype system, with the name of Sea Hunter, to ONR for further development. For the Navy, the payoff has been significant: After allowing its R&D partner, DARPA, to assume some of the early risk, the Navy has acquired a revolutionary prototype that could become an entirely new class of naval vessel, capable of traveling thousands of miles over the open ocean, for months at a time, without a single crewmember aboard. “DARPA develops technology to the point where we prove it’s operationally possible,” said Reed. “We’ll say, ‘Hey, the technology can satisfy this

Former Deputy Defense Secretary Bob Work poses for a photo in 2016 after a christening ceremony in San Diego, California, for a technology-demonstration vessel designed, developed, and built through DARPA’s ACTUV (Anti-Submarine Warfare Continuous Trail Unmanned Vessel) program. In 2018, DARPA transferred the system to the Office of Naval Research for further development.

operational concept,’ and then it will get developed and made more mature somewhere else. And we’ll move on to do the next hard problem.” The ACTUV partnership fits this description. Congress, duly impressed by the Sea Hunter’s capabilities, has approved funds for the Navy to buy another one and to conduct further evaluations. These revolutionary vessels could be the vanguard of a new era in naval warfare, in which the world’s oceans are patrolled by fleets of autonomous surface ships assigned to specific missions: hunting submarines, relaying communications, clearing minefields, or conducting surveillance. The speed and urgency of today’s technological change compel DARPA program managers, in partnership with their service counterparts, to close near-term technology gaps that weaken national security. And while these relationships are often the key to planning, launching, and aiming a DARPA program squarely at fielded results, a program sometimes proves important enough to national security that extra measures are taken to insure it crosses the finish line. One approach on these occasions has been to establish a joint office devoted entirely to the development of an application, as DARPA and other DOD entities have done with past acquisitions or projects. A recent example of this specialized-office approach, the Long-Range Anti-Ship Missile (LRASM) Deployment Office, or LDO, transitioned a suite of technologies into a capability that was honored with the 2017 Defense Laureate award by the editorial staff of Aviation Week in recognition of excellence in the technology’s sophistication and the execution of the LRASM program. The road to establishing LDO began in 2008, when the U.S. military was five years into grueling combat operations in the Middle East. While other nations were developing supersonic anti-ship missiles with increasing strike reach as well as sophisticated electronic anti-access/area denial (A2/AD) countermeasures (involving long-range strike, sensors, guidance, and other military technologies), the American arsenal was falling behind. The former commander of the U.S. Pacific Fleet, Adm. Robert F. Willard, identified an Urgent Operational Need – an anti-ship missile less dependent on traditional intelligence, surveillance, and reconnaissance (ISR) platforms, and with a longer range than existing missiles in this category. Willard reached out to DARPA leadership to accelerate LRASM toward an operational and fielded status.