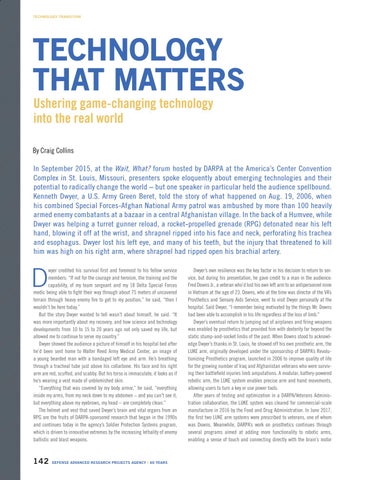 TECHNOLOGY THAT MATTERS Ushering game-changing technology into the real world

In September 2015, at the Wait, What? forum hosted by DARPA at the America’s Center Convention Complex in St. Louis, Missouri, presenters spoke eloquently about emerging technologies and their potential to radically change the world – but one speaker in particular held the audience spellbound. Kenneth Dwyer, a U.S. Army Green Beret, told the story of what happened on Aug. 19, 2006, when his combined Special Forces-Afghan National Army patrol was ambushed by more than 100 heavily armed enemy combatants at a bazaar in a central Afghanistan village. In the back of a Humvee, while Dwyer was helping a turret gunner reload, a rocket-propelled grenade (RPG) detonated near his left hand, blowing it off at the wrist, and shrapnel ripped into his face and neck, perforating his trachea and esophagus. Dwyer lost his left eye, and many of his teeth, but the injury that threatened to kill him was high on his right arm, where shrapnel had ripped open his brachial artery.

wyer credited his survival first and foremost to his fellow service members: “If not for the courage and heroism, the training and the capability, of my team sergeant and my 18 Delta Special Forces medic being able to fight their way through about 75 meters of uncovered terrain through heavy enemy fire to get to my position,” he said, “then I wouldn’t be here today.” But the story Dwyer wanted to tell wasn’t about himself, he said. “It was more importantly about my recovery, and how science and technology developments from 10 to 15 to 20 years ago not only saved my life, but allowed me to continue to serve my country.” Dwyer showed the audience a picture of himself in his hospital bed after he’d been sent home to Walter Reed Army Medical Center, an image of a young bearded man with a bandaged left eye and arm. He’s breathing through a tracheal tube just above his collarbone. His face and his right arm are red, scuffed, and scabby. But his torso is immaculate; it looks as if he’s wearing a vest made of unblemished skin. “Everything that was covered by my body armor,” he said, “everything inside my arms, from my neck down to my abdomen – and you can’t see it, but everything above my eyebrows, my head – are completely clean.” The helmet and vest that saved Dwyer’s brain and vital organs from an RPG are the fruits of DARPA-sponsored research that began in the 1990s and continues today in the agency’s Soldier Protection Systems program, which is driven to innovative extremes by the increasing lethality of enemy ballistic and blast weapons.

Dwyer’s own resilience was the key factor in his decision to return to service, but during his presentation, he gave credit to a man in the audience: Fred Downs Jr., a veteran who’d lost his own left arm to an antipersonnel mine in Vietnam at the age of 23. Downs, who at the time was director of the VA’s Prosthetics and Sensory Aids Service, went to visit Dwyer personally at the hospital. Said Dwyer, “I remember being motivated by the things Mr. Downs had been able to accomplish in his life regardless of the loss of limb.” Dwyer’s eventual return to jumping out of airplanes and firing weapons was enabled by prosthetics that provided him with dexterity far beyond the static stump-and-socket limbs of the past. When Downs stood to acknowledge Dwyer’s thanks in St. Louis, he showed off his own prosthetic arm, the LUKE arm, originally developed under the sponsorship of DARPA’s Revolutionizing Prosthetics program, launched in 2006 to improve quality of life for the growing number of Iraq and Afghanistan veterans who were surviving their battlefield injuries limb amputations. A modular, battery-powered robotic arm, the LUKE system enables precise arm and hand movements, allowing users to turn a key or use power tools. After years of testing and optimization in a DARPA/Veterans Administration collaboration, the LUKE system was cleared for commercial-scale manufacture in 2016 by the Food and Drug Administration. In June 2017, the first two LUKE arm systems were prescribed to veterans, one of whom was Downs. Meanwhile, DARPA’s work on prosthetics continues through several programs aimed at adding more functionality to robotic arms, enabling a sense of touch and connecting directly with the brain’s motor