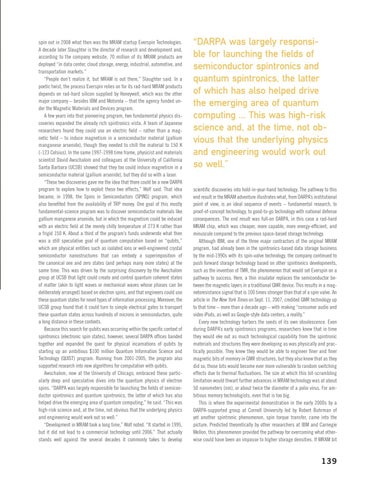 spin out in 2008 what then was the MRAM startup Everspin Technologies. A decade later Slaughter is the director of research and development and, according to the company website, 70 million of its MRAM products are deployed “in data center, cloud storage, energy, industrial, automotive, and transportation markets.” “People don’t realize it, but MRAM is out there,” Slaughter said. In a poetic twist, the process Everspin relies on for its rad-hard MRAM products depends on rad-hard silicon supplied by Honeywell, which was the other major company – besides IBM and Motorola – that the agency funded under the Magnetic Materials and Devices program. A few years into that pioneering program, two fundamental physics discoveries expanded the already rich spintronics vista. A team of Japanese researchers found they could use an electric field – rather than a magnetic field – to induce magnetism in a semiconductor material (gallium manganese arsenide), though they needed to chill the material to 150 K (-123 Celsius). In the same 1997-1998 time frame, physicist and materials scientist David Awschalom and colleagues at the University of California Santa Barbara (UCSB) showed that they too could induce magnetism in a semiconductor material (gallium arsenide), but they did so with a laser. “These two discoveries gave me the idea that there could be a new DARPA program to explore how to exploit these two effects,” Wolf said. That idea became, in 1998, the Spins in Semiconductors (SPINS) program, which also benefited from the availability of TRP money. One goal of this mostly fundamental-science program was to discover semiconductor materials like gallium manganese arsenide, but in which the magnetism could be induced with an electric field at the merely chilly temperature of 273 K rather than a frigid 150 K. About a third of the program’s funds underwrote what then was a still speculative goal of quantum computation based on “qubits,” which are physical entities such as isolated ions or well-engineered crystal semiconductor nanostructures that can embody a superimposition of the canonical one and zero states (and perhaps many more states) at the same time. This was driven by the surprising discovery by the Awschalom group at UCSB that light could create and control quantum coherent states of matter (akin to light waves or mechanical waves whose phases can be deliberately arranged) based on electron spins, and that engineers could use these quantum states for novel types of information processing. Moreover, the UCSB group found that it could turn to simple electrical gates to transport these quantum states across hundreds of microns in semiconductors, quite a long distance in these contexts. Because this search for qubits was occurring within the specific context of spintronics (electronic spin states), however, several DARPA offices banded together and expanded the quest for physical incarnations of qubits by starting up an ambitious $100 million Quantum Information Science and Technology (QUIST) program. Running from 2001-2005, the program also supported research into new algorithms for computation with qubits. Awschalom, now at the University of Chicago, embraced these particularly deep and speculative dives into the quantum physics of electron spins. “DARPA was largely responsible for launching the fields of semiconductor spintronics and quantum spintronics, the latter of which has also helped drive the emerging area of quantum computing,” he said. “This was high-risk science and, at the time, not obvious that the underlying physics and engineering would work out so well.” “Development in MRAM took a long time,” Wolf noted. “It started in 1995, but it did not lead to a commercial technology until 2006.” That actually stands well against the several decades it commonly takes to develop

“DARPA was largely responsible for launching the fields of semiconductor spintronics and quantum spintronics, the latter of which has also helped drive the emerging area of quantum computing … This was high-risk science and, at the time, not obvious that the underlying physics and engineering would work out so well.” scientific discoveries into hold-in-your-hand technology. The pathway to this end result in the MRAM adventure illustrates what, from DARPA’s institutional point of view, is an ideal sequence of events – fundamental research, to proof-of-concept technology, to good-to-go technology with national defense consequences. The end result was full-on DARPA, in this case a rad-hard MRAM chip, which was cheaper, more capable, more energy-efficient, and minuscule compared to the previous space-based storage technology. Although IBM, one of the three major contractors of the original MRAM program, had already been in the spintronics-based data storage business by the mid-1990s with its spin-valve technology, the company continued to push forward storage technology based on other spintronics developments, such as the invention of TMR, the phenomenon that would set Everspin on a pathway to success. Here, a thin insulator replaces the semiconductor between the magnetic layers in a traditional GMR device. This results in a magnetoresistance signal that is 100 times stronger than that of a spin valve. An article in The New York Times on Sept. 11, 2007, credited GMR technology up to that time – more than a decade ago – with making “consumer audio and video iPods, as well as Google-style data centers, a reality.” Every new technology harbors the seeds of its own obsolescence. Even during DARPA’s early spintronics programs, researchers knew that in time they would eke out as much technological capability from the spintronic materials and structures they were developing as was physically and practically possible. They knew they would be able to engineer finer and finer magnetic bits of memory in GMR structures, but they also knew that as they did so, those bits would become ever more vulnerable to random switching effects due to thermal fluctuations. The size at which this bit-scrambling limitation would thwart further advances in MRAM technology was at about 50 nanometers (nm), or about twice the diameter of a polio virus. For ambitious memory technologists, even that is too big. This is where the experimental demonstration in the early 2000s by a DARPA-supported group at Cornell University led by Robert Buhrman of yet another spintronic phenomenon, spin torque transfer, came into the picture. Predicted theoretically by other researchers at IBM and Carnegie Mellon, this phenomenon provided the pathway for overcoming what otherwise could have been an impasse to higher storage densities. If MRAM bit