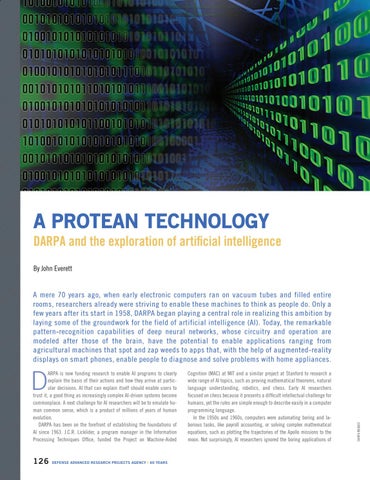 ARPA is now funding research to enable AI programs to clearly explain the basis of their actions and how they arrive at particular decisions. AI that can explain itself should enable users to trust it, a good thing as increasingly complex AI-driven systems become commonplace. A next challenge for AI researchers will be to emulate human common sense, which is a product of millions of years of human evolution. DARPA has been on the forefront of establishing the foundations of AI since 1963. J.C.R. Licklider, a program manager in the Information Processing Techniques Office, funded the Project on Machine-Aided

Cognition (MAC) at MIT and a similar project at Stanford to research a wide range of AI topics, such as proving mathematical theorems, natural language understanding, robotics, and chess. Early AI researchers focused on chess because it presents a difficult intellectual challenge for humans, yet the rules are simple enough to describe easily in a computer programming language. In the 1950s and 1960s, computers were automating boring and laborious tasks, like payroll accounting, or solving complex mathematical equations, such as plotting the trajectories of the Apollo missions to the moon. Not surprisingly, AI researchers ignored the boring applications of

A mere 70 years ago, when early electronic computers ran on vacuum tubes and filled entire rooms, researchers already were striving to enable these machines to think as people do. Only a few years after its start in 1958, DARPA began playing a central role in realizing this ambition by laying some of the groundwork for the field of artificial intelligence (AI). Today, the remarkable pattern-recognition capabilities of deep neural networks, whose circuitry and operation are modeled after those of the brain, have the potential to enable applications ranging from agricultural machines that spot and zap weeds to apps that, with the help of augmented-reality displays on smart phones, enable people to diagnose and solve problems with home appliances.