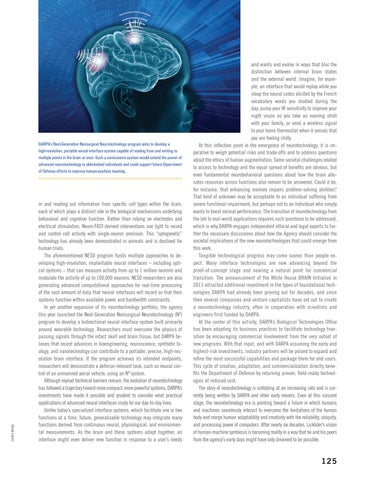 DARPA’s Next-Generation Nonsurgical Neurotechnology program aims to develop a high-resolution, portable neural interface system capable of reading from and writing to multiple points in the brain at once. Such a noninvasive system would extend the power of advanced neurotechnology to able-bodied individuals and could support future Department of Defense efforts to improve human-machine teaming.

in and reading out information from specific cell types within the brain, each of which plays a distinct role in the biological mechanisms underlying behavioral and cognitive function. Rather than relying on electrodes and electrical stimulation, Neuro-FAST-derived interventions use light to record and control cell activity with single-neuron precision. This “optogenetic” technology has already been demonstrated in animals and is destined for human trials. The aforementioned NESD program funds multiple approaches to developing high-resolution, implantable neural interfaces – including optical systems – that can measure activity from up to 1 million neurons and modulate the activity of up to 100,000 neurons. NESD researchers are also generating advanced computational approaches for real-time processing of the vast amount of data that neural interfaces will record so that their systems function within available power and bandwidth constraints. In yet another expansion of its neurotechnology portfolio, the agency this year launched the Next-Generation Nonsurgical Neurotechnology (N3) program to develop a bidirectional neural interface system built primarily around wearable technology. Researchers must overcome the physics of passing signals through the intact skull and brain tissue, but DARPA believes that recent advances in bioengineering, neuroscience, synthetic biology, and nanotechnology can contribute to a portable, precise, high-resolution brain interface. If the program achieves its intended endpoints, researchers will demonstrate a defense-relevant task, such as neural control of an unmanned aerial vehicle, using an N3 system. Although myriad technical barriers remain, the evolution of neurotechnology has followed a trajectory toward more compact, more powerful systems. DARPA’s investments have made it possible and prudent to consider what practical applications of advanced neural interfaces imply for our day-to-day lives. Unlike today’s specialized interface systems, which facilitate one or two functions at a time, future, generalizable technology may integrate many functions derived from continuous neural, physiological, and environmental measurements. As the brain and these systems adapt together, an interface might even deliver new function in response to a user’s needs

and wants and evolve in ways that blur the distinction between internal brain states and the external world. Imagine, for example, an interface that would replay while you sleep the neural codes elicited by the French vocabulary words you studied during the day, pump your IR sensitivity to improve your night vision as you take an evening stroll with your family, or send a wireless signal to your home thermostat when it senses that you are feeling chilly. At this inflection point in the emergence of neurotechnology, it is imperative to weigh potential risks and trade-offs and to address questions about the ethics of human augmentation. Some societal challenges related to access to technology and the equal spread of benefits are obvious, but even fundamental neurobehavioral questions about how the brain allocates resources across functions also remain to be answered. Could it be, for instance, that enhancing memory impairs problem-solving abilities? That kind of unknown may be acceptable to an individual suffering from severe functional impairment, but perhaps not to an individual who simply wants to boost normal performance. The transition of neurotechnology from the lab to real-world applications requires such questions to be addressed, which is why DARPA engages independent ethical and legal experts to further the necessary discussions about how the Agency should consider the societal implications of the new neurotechnologies that could emerge from this work. Tangible technological progress may come sooner than people expect. Many interface technologies are now advancing beyond the proof-of-concept stage and nearing a natural point for commercial transition. The announcement of the White House BRAIN Initiative in 2013 attracted additional investment in the types of foundational technologies DARPA had already been proving out for decades, and since then several companies and venture capitalists have set out to create a neurotechnology industry, often in cooperation with scientists and engineers first funded by DARPA. At the center of this activity, DARPA’s Biological Technologies Office has been adapting its business practices to facilitate technology transition by encouraging commercial involvement from the very outset of new programs. With that input, and with DARPA assuming the early and highest-risk investments, industry partners will be poised to expand and refine the most successful capabilities and package them for end users. This cycle of creation, adaptation, and commercialization directly benefits the Department of Defense by returning proven, field-ready technologies at reduced cost. The story of neurotechnology is unfolding at an increasing rate and is currently being written by DARPA and other early movers. Even at this nascent stage, the neurotechnology era is pointing toward a future in which humans and machines seamlessly interact to overcome the limitations of the human body and merge human adaptability and creativity with the reliability, ubiquity, and processing power of computers. After nearly six decades, Licklider’s vision of human-machine symbiosis is becoming reality in a way that he and his peers from the agency’s early days might have only dreamed to be possible.