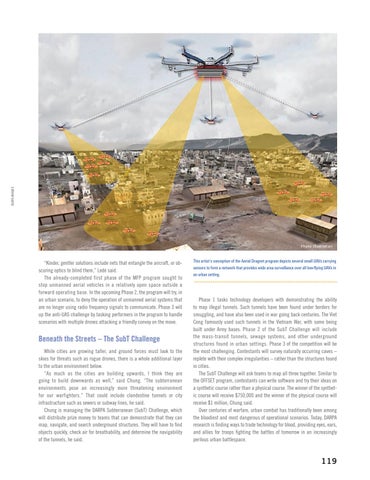 “Kinder, gentler solutions include nets that entangle the aircraft, or obscuring optics to blind them,” Ledé said. The already-completed first phase of the MFP program sought to stop unmanned aerial vehicles in a relatively open space outside a forward operating base. In the upcoming Phase 2, the program will try, in an urban scenario, to deny the operation of unmanned aerial systems that are no longer using radio frequency signals to communicate. Phase 3 will up the anti-UAS challenge by tasking performers in the program to handle scenarios with multiple drones attacking a friendly convoy on the move.

Beneath the Streets – The SubT Challenge While cities are growing taller, and ground forces must look to the skies for threats such as rogue drones, there is a whole additional layer to the urban environment below. “As much as the cities are building upwards, I think they are going to build downwards as well,” said Chung. “The subterranean environments pose an increasingly more threatening environment for our warfighters.” That could include clandestine tunnels or city infrastructure such as sewers or subway lines, he said. Chung is managing the DARPA Subterranean (SubT) Challenge, which will distribute prize money to teams that can demonstrate that they can map, navigate, and search underground structures. They will have to find objects quickly, check air for breathability, and determine the navigability of the tunnels, he said.

This artist’s conception of the Aerial Dragnet program depicts several small UAVs carrying sensors to form a network that provides wide area surveillance over all low-flying UAVs in an urban setting.

Phase 1 tasks technology developers with demonstrating the ability to map illegal tunnels. Such tunnels have been found under borders for smuggling, and have also been used in war going back centuries. The Viet Cong famously used such tunnels in the Vietnam War, with some being built under Army bases. Phase 2 of the SubT Challenge will include the mass-transit tunnels, sewage systems, and other underground structures found in urban settings. Phase 3 of the competition will be the most challenging. Contestants will survey naturally occurring caves – replete with their complex irregularities – rather than the structures found in cities. The SubT Challenge will ask teams to map all three together. Similar to the OFFSET program, contestants can write software and try their ideas on a synthetic course rather than a physical course. The winner of the synthetic course will receive $750,000 and the winner of the physical course will receive $1 million, Chung said. Over centuries of warfare, urban combat has traditionally been among the bloodiest and most dangerous of operational scenarios. Today, DARPA research is finding ways to trade technology for blood, providing eyes, ears, and allies for troops fighting the battles of tomorrow in an increasingly perilous urban battlespace.