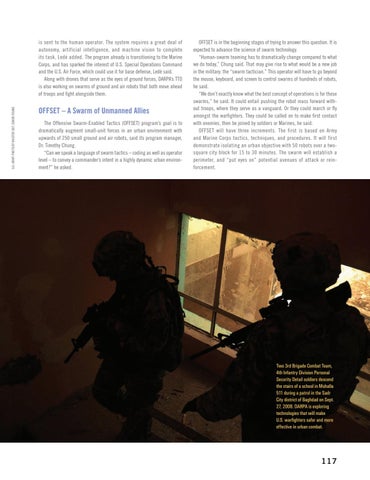 is sent to the human operator. The system requires a great deal of autonomy, artificial intelligence, and machine vision to complete its task, Ledé added. The program already is transitioning to the Marine Corps, and has sparked the interest of U.S. Special Operations Command and the U.S. Air Force, which could use it for base defense, Ledé said. Along with drones that serve as the eyes of ground forces, DARPA’s TTO is also working on swarms of ground and air robots that both move ahead of troops and fight alongside them.

OFFSET – A Swarm of Unmanned Allies The Offensive Swarm-Enabled Tactics (OFFSET) program’s goal is to dramatically augment small-unit forces in an urban environment with upwards of 250 small ground and air robots, said its program manager, Dr. Timothy Chung. “Can we speak a language of swarm tactics – coding as well as operator level – to convey a commander’s intent in a highly dynamic urban environment?” he asked.

OFFSET is in the beginning stages of trying to answer this question. It is expected to advance the science of swarm technology. “Human-swarm teaming has to dramatically change compared to what we do today,” Chung said. That may give rise to what would be a new job in the military: the “swarm tactician.” This operator will have to go beyond the mouse, keyboard, and screen to control swarms of hundreds of robots, he said. “We don’t exactly know what the best concept of operations is for these swarms,” he said. It could entail pushing the robot mass forward without troops, where they serve as a vanguard. Or they could march or fly amongst the warfighters. They could be called on to make first contact with enemies, then be joined by soldiers or Marines, he said. OFFSET will have three increments. The first is based on Army and Marine Corps tactics, techniques, and procedures. It will first demonstrate isolating an urban objective with 50 robots over a twosquare city block for 15 to 30 minutes. The swarm will establish a perimeter, and “put eyes on” potential avenues of attack or reinforcement.

Two 3rd Brigade Combat Team, 4th Infantry Division Personal Security Detail soldiers descend the stairs of a school in Muhalla 511 during a patrol in the Sadr City district of Baghdad on Sept. 27, 2008. DARPA is exploring technologies that will make U.S. warfighters safer and more effective in urban combat.