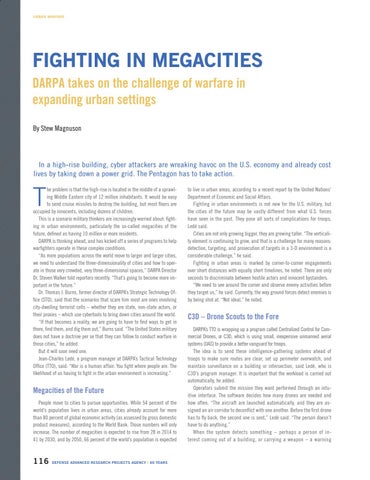 In a high-rise building, cyber attackers are wreaking havoc on the U.S. economy and already cost lives by taking down a power grid. The Pentagon has to take action.

he problem is that the high-rise is located in the middle of a sprawling Middle Eastern city of 12 million inhabitants. It would be easy to send cruise missiles to destroy the building, but most floors are occupied by innocents, including dozens of children. This is a scenario military thinkers are increasingly worried about: fighting in urban environments, particularly the so-called megacities of the future, defined as having 10 million or more residents. DARPA is thinking ahead, and has kicked off a series of programs to help warfighters operate in these complex conditions. “As more populations across the world move to larger and larger cities, we need to understand the three-dimensionality of cities and how to operate in those very crowded, very three-dimensional spaces,” DARPA Director Dr. Steven Walker told reporters recently. “That’s going to become more important in the future.” Dr. Thomas J. Burns, former director of DARPA’s Strategic Technology Office (STO), said that the scenarios that scare him most are ones involving city-dwelling terrorist cells – whether they are state, non-state actors, or their proxies – which use cybertools to bring down cities around the world. “If that becomes a reality, we are going to have to find ways to get in there, find them, and dig them out,” Burns said. “The United States military does not have a doctrine per se that they can follow to conduct warfare in those cities,” he added. But it will soon need one. Jean-Charles Ledé, a program manager at DARPA’s Tactical Technology Office (TTO), said: “War is a human affair. You fight where people are. The likelihood of us having to fight in the urban environment is increasing.”

Megacities of the Future People move to cities to pursue opportunities. While 54 percent of the world’s population lives in urban areas, cities already account for more than 80 percent of global economic activity (as assessed by gross domestic product measures), according to the World Bank. Those numbers will only increase. The number of megacities is expected to rise from 28 in 2014 to 41 by 2030, and by 2050, 66 percent of the world’s population is expected

to live in urban areas, according to a recent report by the United Nations’ Department of Economic and Social Affairs. Fighting in urban environments is not new for the U.S. military, but the cities of the future may be vastly different from what U.S. forces have seen in the past. They pose all sorts of complications for troops, Ledé said. Cities are not only growing bigger, they are growing taller. “The verticality element is continuing to grow, and that is a challenge for many reasons: detection, targeting, and prosecution of targets in a 3-D environment is a considerable challenge,” he said. Fighting in urban areas is marked by corner-to-corner engagements over short distances with equally short timelines, he noted. There are only seconds to discriminate between hostile actors and innocent bystanders. “We need to see around the corner and observe enemy activities before they target us,” he said. Currently, the way ground forces detect enemies is by being shot at. “Not ideal,” he noted.

C3D – Drone Scouts to the Fore DARPA’s TTO is wrapping up a program called Centralized Control for Commercial Drones, or C3D, which is using small, inexpensive unmanned aerial systems (UAS) to provide a better vanguard for troops. The idea is to send these intelligence-gathering systems ahead of troops to make sure routes are clear, set up perimeter overwatch, and maintain surveillance on a building or intersection, said Ledé, who is C3D’s program manager. It is important that the workload is carried out automatically, he added. Operators submit the mission they want performed through an intuitive interface. The software decides how many drones are needed and how often. “The aircraft are launched automatically, and they are assigned an air corridor to deconflict with one another. Before the first drone has to fly back, the second one is sent,” Ledé said. “The person doesn’t have to do anything.” When the system detects something – perhaps a person of interest coming out of a building, or carrying a weapon – a warning