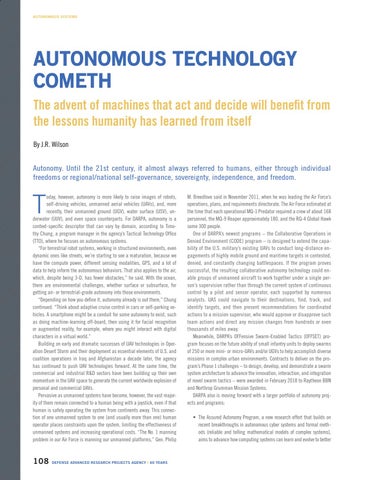 AUTONOMOUS TECHNOLOGY COMETH The advent of machines that act and decide will benefit from the lessons humanity has learned from itself By J.R. Wilson

Autonomy. Until the 21st century, it almost always referred to humans, either through individual freedoms or regional/national self-governance, sovereignty, independence, and freedom.

oday, however, autonomy is more likely to raise images of robots, self-driving vehicles, unmanned aerial vehicles (UAVs), and, more recently, their unmanned ground (UGV), water surface (USV), underwater (UUV), and even space counterparts. For DARPA, autonomy is a context-specific descriptor that can vary by domain, according to Timothy Chung, a program manager in the agency’s Tactical Technology Office (TTO), where he focuses on autonomous systems. “For terrestrial robot systems, working in structured environments, even dynamic ones like streets, we’re starting to see a maturation, because we have the compute power, different sensing modalities, GPS, and a lot of data to help inform the autonomous behaviors. That also applies to the air, which, despite being 3-D, has fewer obstacles,” he said. With the ocean, there are environmental challenges, whether surface or subsurface, for getting air- or terrestrial-grade autonomy into those environments. “Depending on how you define it, autonomy already is out there,” Chung continued. “Think about adaptive cruise control in cars or self-parking vehicles. A smartphone might be a conduit for some autonomy to exist, such as doing machine-learning off-board, then using it for facial recognition or augmented reality, for example, where you might interact with digital characters in a virtual world.” Building on early and dramatic successes of UAV technologies in Operation Desert Storm and their deployment as essential elements of U.S. and coalition operations in Iraq and Afghanistan a decade later, the agency has continued to push UAV technologies forward. At the same time, the commercial and industrial R&D sectors have been building up their own momentum in the UAV space to generate the current worldwide explosion of personal and commercial UAVs. Pervasive as unmanned systems have become, however, the vast majority of them remain connected to a human being with a joystick, even if that human is safely operating the system from continents away. This connection of one unmanned system to one (and usually more than one) human operator places constraints upon the system, limiting the effectiveness of unmanned systems and increasing operational costs. “The No. 1 manning problem in our Air Force is manning our unmanned platforms,” Gen. Philip

M. Breedlove said in November 2011, when he was leading the Air Force’s operations, plans, and requirements directorate. The Air Force estimated at the time that each operational MQ-1 Predator required a crew of about 168 personnel, the MQ-9 Reaper approximately 180, and the RQ-4 Global Hawk some 300 people. One of DARPA’s newest programs – the Collaborative Operations in Denied Environment (CODE) program – is designed to extend the capability of the U.S. military’s existing UAVs to conduct long-distance engagements of highly mobile ground and maritime targets in contested, denied, and constantly changing battlespaces. If the program proves successful, the resulting collaborative autonomy technology could enable groups of unmanned aircraft to work together under a single person’s supervision rather than through the current system of continuous control by a pilot and sensor operator, each supported by numerous analysts. UAS could navigate to their destinations, find, track, and identify targets, and then present recommendations for coordinated actions to a mission supervisor, who would approve or disapprove such team actions and direct any mission changes from hundreds or even thousands of miles away. Meanwhile, DARPA’s OFFensive Swarm-Enabled Tactics (OFFSET) program focuses on the future ability of small infantry units to deploy swarms of 250 or more mini- or micro-UAVs and/or UGVs to help accomplish diverse missions in complex urban environments. Contracts to deliver on the program’s Phase 1 challenges – to design, develop, and demonstrate a swarm system architecture to advance the innovation, interaction, and integration of novel swarm tactics – were awarded in February 2018 to Raytheon BBN and Northrop Grumman Mission Systems. DARPA also is moving forward with a larger portfolio of autonomy projects and programs: • The Assured Autonomy Program, a new research effort that builds on recent breakthroughs in autonomous cyber systems and formal methods (reliable and telling mathematical models of complex systems), aims to advance how computing systems can learn and evolve to better