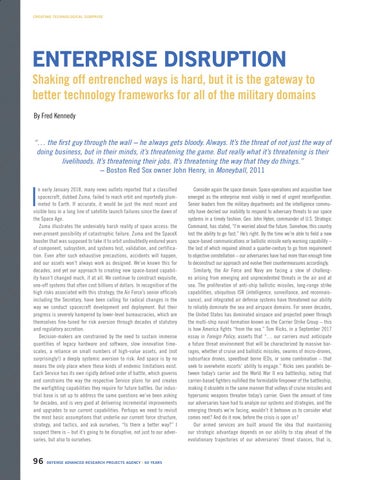 ENTERPRISE DISRUPTION Shaking off entrenched ways is hard, but it is the gateway to better technology frameworks for all of the military domains By Fred Kennedy

n early January 2018, many news outlets reported that a classified spacecraft, dubbed Zuma, failed to reach orbit and reportedly plummeted to Earth. If accurate, it would be just the most recent and visible loss in a long line of satellite launch failures since the dawn of the Space Age. Zuma illustrates the undeniably harsh reality of space access: the ever-present possibility of catastrophic failure. Zuma and the SpaceX booster that was supposed to take it to orbit undoubtedly endured years of component, subsystem, and systems test, validation, and certification. Even after such exhaustive precautions, accidents will happen, and our assets won’t always work as designed. We’ve known this for decades, and yet our approach to creating new space-based capability hasn’t changed much, if at all. We continue to construct exquisite, one-off systems that often cost billions of dollars. In recognition of the high risks associated with this strategy, the Air Force’s senior officials including the Secretary, have been calling for radical changes in the way we conduct spacecraft development and deployment. But their progress is severely hampered by lower-level bureaucracies, which are themselves fine-tuned for risk aversion through decades of statutory and regulatory accretion. Decision-makers are constrained by the need to sustain immense quantities of legacy hardware and software, slow innovation timescales, a reliance on small numbers of high-value assets, and (not surprisingly!) a deeply systemic aversion to risk. And space is by no means the only place where these kinds of endemic limitations exist. Each Service has its own rigidly defined order of battle, which governs and constrains the way the respective Service plans for and creates the warfighting capabilities they require for future battles. Our industrial base is set up to address the same questions we’ve been asking for decades, and is very good at delivering incremental improvements and upgrades to our current capabilities. Perhaps we need to revisit the most basic assumptions that underlie our current force structure, strategy, and tactics, and ask ourselves, “Is there a better way?” I suspect there is – but it’s going to be disruptive, not just to our adversaries, but also to ourselves.

Consider again the space domain. Space operations and acquisition have emerged as the enterprise most visibly in need of urgent reconfiguration. Senior leaders from the military departments and the intelligence community have decried our inability to respond to adversary threats to our space systems in a timely fashion. Gen. John Hyten, commander of U.S. Strategic Command, has stated, “I’m worried about the future. Somehow, this country lost the ability to go fast.” He’s right. By the time we’re able to field a new space-based communications or ballistic missile early warning capability – the last of which required almost a quarter-century to go from requirement to objective constellation – our adversaries have had more than enough time to deconstruct our approach and evolve their countermeasures accordingly. Similarly, the Air Force and Navy are facing a slew of challenges arising from emerging and unprecedented threats in the air and at sea. The proliferation of anti-ship ballistic missiles, long-range strike capabilities, ubiquitous ISR (intelligence, surveillance, and reconnaissance), and integrated air defense systems have threatened our ability to reliably dominate the sea and airspace domains. For seven decades, the United States has dominated airspace and projected power through the multi-ship naval formation known as the Carrier Strike Group – this is how America fights “from the sea.” Tom Ricks, in a September 2017 essay in Foreign Policy, asserts that “… our carriers must anticipate a future threat environment that will be characterized by massive barrages, whether of cruise and ballistic missiles, swarms of micro-drones, subsurface drones, speedboat borne IEDs, or some combination – that seek to overwhelm escorts’ ability to engage.” Ricks sees parallels between today’s carrier and the World War II era battleship, noting that carrier-based fighters nullified the formidable firepower of the battleship, making it obsolete in the same manner that volleys of cruise missiles and hypersonic weapons threaten today’s carrier. Given the amount of time our adversaries have had to analyze our systems and strategies, and the emerging threats we’re facing, wouldn’t it behoove us to consider what comes next? And do it now, before the crisis is upon us? Our armed services are built around the idea that maintaining our strategic advantage depends on our ability to stay ahead of the evolutionary trajectories of our adversaries’ threat stances, that is,