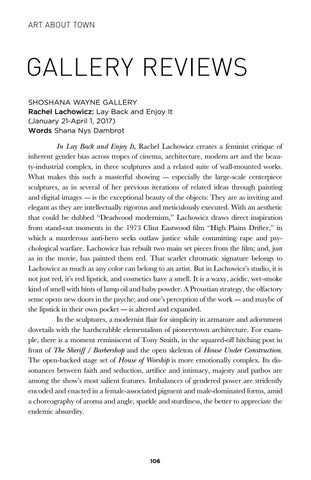 In Lay Back and Enjoy It, Rachel Lachowicz creates a feminist critique of inherent gender bias across tropes of cinema, architecture, modern art and the beauty-industrial complex, in three sculptures and a related suite of wall-mounted works. What makes this such a masterful showing — especially the large-scale centerpiece sculptures, as in several of her previous iterations of related ideas through painting and digital images — is the exceptional beauty of the objects: They are as inviting and elegant as they are intellectually rigorous and meticulously executed. With an aesthetic that could be dubbed “Deadwood modernism,” Lachowicz draws direct inspiration from stand-out moments in the 1973 Clint Eastwood film “High Plains Drifter,” in which a murderous anti-hero seeks outlaw justice while committing rape and psychological warfare. Lachowicz has rebuilt two main set pieces from the film; and, just as in the movie, has painted them red. That scarlet chromatic signature belongs to Lachowicz as much as any color can belong to an artist. But in Lachowicz’s studio, it is not just red, it’s red lipstick, and cosmetics have a smell. It is a waxy, acidic, wet-smoke kind of smell with hints of lamp oil and baby powder. A Proustian strategy, the olfactory sense opens new doors in the psyche; and one’s perception of the work — and maybe of the lipstick in their own pocket — is altered and expanded. In the sculptures, a modernist flair for simplicity in armature and adornment dovetails with the hardscrabble elementalism of pioneertown architecture. For example, there is a moment reminiscent of Tony Smith, in the squared-off hitching post in front of The Sheriff / Barbershop and the open skeleton of House Under Construction. The open-backed stage set of House of Worship is more emotionally complex. Its dissonances between faith and seduction, artifice and intimacy, majesty and pathos are among the show’s most salient features. Imbalances of gendered power are stridently encoded and enacted in a female-associated pigment and male-dominated forms, amid a choreography of aroma and angle, sparkle and sturdiness, the better to appreciate the endemic absurdity.

Rounding out this issue's focus on photography are features on contemporary painters, Kerry James Marshall and Andy Moses. Other highlights inside this issue: A preview of the new Marciano Art Foundation; an insightful look into the shifting landscape of Bergamot Station Arts Center; and, a look at Jimmie Durham: At the Center of the World at the Hammer Museum – an important exhibit that might never have seen the light of day if not for NEA funding – plus selected museum and gallery reviews – and much more...