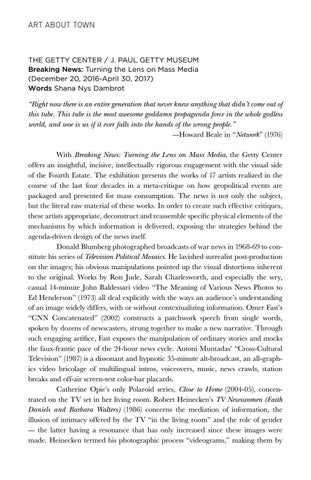 “Right now there is an entire generation that never knew anything that didn’t come out of this tube. This tube is the most awesome goddamn propaganda force in the whole godless world, and woe is us if it ever falls into the hands of the wrong people.” —Howard Beale in “Network” (1976) With Breaking News: Turning the Lens on Mass Media, the Getty Center offers an insightful, incisive, intellectually rigorous engagement with the visual side of the Fourth Estate. The exhibition presents the works of 17 artists realized in the course of the last four decades in a meta-critique on how geopolitical events are packaged and presented for mass consumption. The news is not only the subject, but the literal raw material of these works. In order to create such effective critiques, these artists appropriate, deconstruct and reassemble specific physical elements of the mechanisms by which information is delivered, exposing the strategies behind the agenda-driven design of the news itself. Donald Blumberg photographed broadcasts of war news in 1968-69 to constitute his series of Television Political Mosaics. He lavished surrealist post-production on the images; his obvious manipulations pointed up the visual distortions inherent to the original. Works by Ron Jude, Sarah Charlesworth, and especially the wry, casual 14-minute John Baldessari video “The Meaning of Various News Photos to Ed Henderson” (1973) all deal explicitly with the ways an audience’s understanding of an image widely differs, with or without contextualizing information. Omer Fast’s “CNN Concatenated” (2002) constructs a patchwork speech from single words, spoken by dozens of newscasters, strung together to make a new narrative. Through such engaging artifice, Fast exposes the manipulation of ordinary stories and mocks the faux-frantic pace of the 24-hour news cycle. Antoni Muntadas’ “Cross-Cultural Television” (1987) is a dissonant and hypnotic 35-minute alt-broadcast, an all-graphics video bricolage of multilingual intros, voiceovers, music, news crawls, station breaks and off-air screen-test color-bar placards. Catherine Opie’s only Polaroid series, Close to Home (2004-05), concentrated on the TV set in her living room. Robert Heinecken’s TV Newswomen (Faith Daniels and Barbara Walters) (1986) concerns the mediation of information, the illusion of intimacy offered by the TV “in the living room” and the role of gender — the latter having a resonance that has only increased since these images were made. Heinecken termed his photographic process “videograms,” making them by

Rounding out this issue's focus on photography are features on contemporary painters, Kerry James Marshall and Andy Moses. Other highlights inside this issue: A preview of the new Marciano Art Foundation; an insightful look into the shifting landscape of Bergamot Station Arts Center; and, a look at Jimmie Durham: At the Center of the World at the Hammer Museum – an important exhibit that might never have seen the light of day if not for NEA funding – plus selected museum and gallery reviews – and much more...