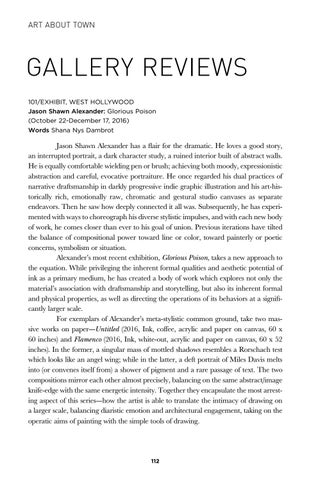 Jason Shawn Alexander has a flair for the dramatic. He loves a good story, an interrupted portrait, a dark character study, a ruined interior built of abstract walls. He is equally comfortable wielding pen or brush; achieving both moody, expressionistic abstraction and careful, evocative portraiture. He once regarded his dual practices of narrative draftsmanship in darkly progressive indie graphic illustration and his art-historically rich, emotionally raw, chromatic and gestural studio canvases as separate endeavors. Then he saw how deeply connected it all was. Subsequently, he has experimented with ways to choreograph his diverse stylistic impulses, and with each new body of work, he comes closer than ever to his goal of union. Previous iterations have tilted the balance of compositional power toward line or color, toward painterly or poetic concerns, symbolism or situation. Alexander’s most recent exhibition, Glorious Poison, takes a new approach to the equation. While privileging the inherent formal qualities and aesthetic potential of ink as a primary medium, he has created a body of work which explores not only the material’s association with draftsmanship and storytelling, but also its inherent formal and physical properties, as well as directing the operations of its behaviors at a significantly larger scale. For exemplars of Alexander’s meta-stylistic common ground, take two massive works on paper—Untitled (2016, Ink, coffee, acrylic and paper on canvas, 60 x 60 inches) and Flamenco (2016, Ink, white-out, acrylic and paper on canvas, 60 x 52 inches). In the former, a singular mass of mottled shadows resembles a Rorschach test which looks like an angel wing; while in the latter, a deft portrait of Miles Davis melts into (or convenes itself from) a shower of pigment and a rare passage of text. The two compositions mirror each other almost precisely, balancing on the same abstract/image knife-edge with the same energetic intensity. Together they encapsulate the most arresting aspect of this series—how the artist is able to translate the intimacy of drawing on a larger scale, balancing diaristic emotion and architectural engagement, taking on the operatic aims of painting with the simple tools of drawing.

Kicking off the winter art season, this issue of Fabrik launches at the LA Art Show. Inside, we take a look at global influences on art from an LA perspective, shining a a spotlight on some of the exciting local museums, art fairs, gallery exhibits, artists and events, that make LA a world class art center. Check out our winter and spring art show listing, LA Art Show preview and much more - inside this issue!