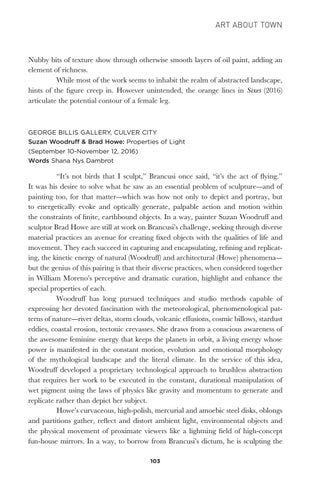 Nubby bits of texture show through otherwise smooth layers of oil paint, adding an element of richness. While most of the work seems to inhabit the realm of abstracted landscape, hints of the figure creep in. However unintended, the orange lines in Sixes (2016) articulate the potential contour of a female leg.

“It’s not birds that I sculpt,” Brancusi once said, “it’s the act of flying.” It was his desire to solve what he saw as an essential problem of sculpture—and of painting too, for that matter—which was how not only to depict and portray, but to energetically evoke and optically generate, palpable action and motion within the constraints of finite, earthbound objects. In a way, painter Suzan Woodruff and sculptor Brad Howe are still at work on Brancusi’s challenge, seeking through diverse material practices an avenue for creating fixed objects with the qualities of life and movement. They each succeed in capturing and encapsulating, refining and replicating, the kinetic energy of natural (Woodruff) and architectural (Howe) phenomena— but the genius of this pairing is that their diverse practices, when considered together in William Moreno’s perceptive and dramatic curation, highlight and enhance the special properties of each. Woodruff has long pursued techniques and studio methods capable of expressing her devoted fascination with the meteorological, phenomenological patterns of nature—river deltas, storm clouds, volcanic effusions, cosmic billows, stardust eddies, coastal erosion, tectonic crevasses. She draws from a conscious awareness of the awesome feminine energy that keeps the planets in orbit, a living energy whose power is manifested in the constant motion, evolution and emotional morphology of the mythological landscape and the literal climate. In the service of this idea, Woodruff developed a proprietary technological approach to brushless abstraction that requires her work to be executed in the constant, durational manipulation of wet pigment using the laws of physics like gravity and momentum to generate and replicate rather than depict her subject. Howe’s curvaceous, high-polish, mercurial and amoebic steel disks, oblongs and partitions gather, reflect and distort ambient light, environmental objects and the physical movement of proximate viewers like a lightning field of high-concept fun-house mirrors. In a way, to borrow from Brancusi’s dictum, he is sculpting the 103

In this issue of Fabrik, we look at art that responds to, and perhaps explains, our complex times. Among some of the features in this issue that touch on the socio-political theme, Shana Nys Dambrot surveys art installations at LAX, the gateway to our city. Kristen Osborne-Bartucca’s piece on Fréderick Gautier examines an artist’s response to the LA River, which relates to the strange geography of this city, the fragility of our resources and local environment. Eva Recinos takes a look at the Long Beach based Museum of Latin American Art on its 20th anniversary, its history and where it stands at a crossroads today.