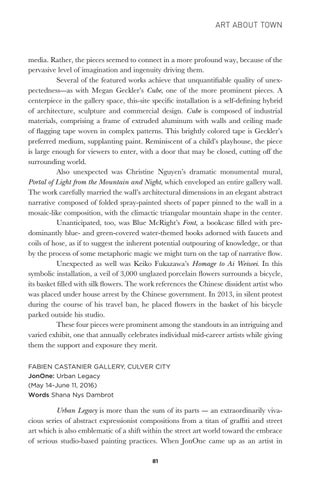 media. Rather, the pieces seemed to connect in a more profound way, because of the pervasive level of imagination and ingenuity driving them. Several of the featured works achieve that unquantifiable quality of unexpectedness—as with Megan Geckler’s Cube, one of the more prominent pieces. A centerpiece in the gallery space, this-site specific installation is a self-defining hybrid of architecture, sculpture and commercial design. Cube is composed of industrial materials, comprising a frame of extruded aluminum with walls and ceiling made of flagging tape woven in complex patterns. This brightly colored tape is Geckler’s preferred medium, supplanting paint. Reminiscent of a child’s playhouse, the piece is large enough for viewers to enter, with a door that may be closed, cutting off the surrounding world. Also unexpected was Christine Nguyen’s dramatic monumental mural, Portal of Light from the Mountain and Night, which enveloped an entire gallery wall. The work carefully married the wall’s architectural dimensions in an elegant abstract narrative composed of folded spray-painted sheets of paper pinned to the wall in a mosaic-like composition, with the climactic triangular mountain shape in the center. Unanticipated, too, was Blue McRight’s Font, a bookcase filled with predominantly blue- and green-covered water-themed books adorned with faucets and coils of hose, as if to suggest the inherent potential outpouring of knowledge, or that by the process of some metaphoric magic we might turn on the tap of narrative flow. Unexpected as well was Keiko Fukazawa’s Homage to Ai Weiwei. In this symbolic installation, a veil of 3,000 unglazed porcelain flowers surrounds a bicycle, its basket filled with silk flowers. The work references the Chinese dissident artist who was placed under house arrest by the Chinese government. In 2013, in silent protest during the course of his travel ban, he placed flowers in the basket of his bicycle parked outside his studio. These four pieces were prominent among the standouts in an intriguing and varied exhibit, one that annually celebrates individual mid-career artists while giving them the support and exposure they merit. FABIEN CASTANIER GALLERY, CULVER CITY JonOne: Urban Legacy (May 14-June 11, 2016) Words Shana Nys Dambrot

Urban Legacy is more than the sum of its parts — an extraordinarily vivacious series of abstract expressionist compositions from a titan of graffiti and street art which is also emblematic of a shift within the street art world toward the embrace of serious studio-based painting practices. When JonOne came up as an artist in 81