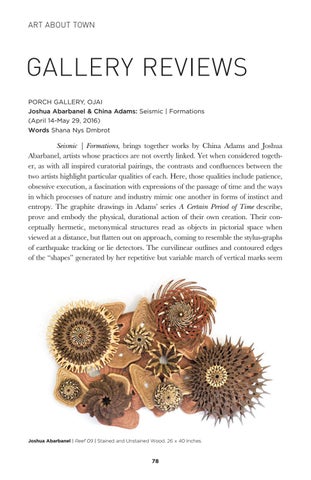 Seismic | Formations, brings together works by China Adams and Joshua Abarbanel, artists whose practices are not overtly linked. Yet when considered together, as with all inspired curatorial pairings, the contrasts and confluences between the two artists highlight particular qualities of each. Here, those qualities include patience, obsessive execution, a fascination with expressions of the passage of time and the ways in which processes of nature and industry mimic one another in forms of instinct and entropy. The graphite drawings in Adams’ series A Certain Period of Time describe, prove and embody the physical, durational action of their own creation. Their conceptually hermetic, metonymical structures read as objects in pictorial space when viewed at a distance, but flatten out on approach, coming to resemble the stylus-graphs of earthquake tracking or lie detectors. The curvilinear outlines and contoured edges of the “shapes” generated by her repetitive but variable march of vertical marks seem