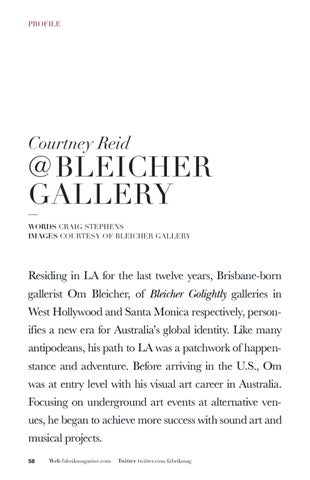 Residing in LA for the last twelve years, Brisbane-born gallerist Om Bleicher, of Bleicher Golightly galleries in West Hollywood and Santa Monica respectively, personifies a new era for Australiaâ&#x20AC;&#x2122;s global identity. Like many antipodeans, his path to LA was a patchwork of happenstance and adventure. Before arriving in the U.S., Om was at entry level with his visual art career in Australia. Focusing on underground art events at alternative venues, he began to achieve more success with sound art and musical projects. 58