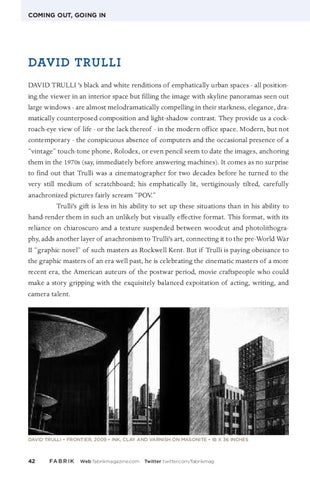 COMING OUT, GOING IN

DAVID TRULLI DAVID TRULLI &#39;s black and white renditions of emphatically urban spaces - all positioning the viewer in an interior space but filling the image with skyline panoramas seen out large windows - are almost melodramatically compelling in their starkness, elegance, dramatically counterposed composition and light-shadow contrast. They provide us a cockroach-eye view of life - or the lack thereof - in the modern office space. Modern, but not contemporary - the conspicuous absence of computers and the occasional presence of a “vintage” touch-tone phone, Rolodex, or even pencil seem to date the images, anchoring them in the 1970s (say, immediately before answering machines). It comes as no surprise to find out that Trulli was a cinematographer for two decades before he turned to the very still medium of scratchboard; his emphatically lit, vertiginously tilted, carefully anachronized pictures fairly scream “POV.” Trulli&#39;s gift is less in his ability to set up these situations than in his ability to hand-render them in such an unlikely but visually effective format. This format, with its reliance on chiaroscuro and a texture suspended between woodcut and photolithography, adds another layer of anachronism to Trulli&#39;s art, connecting it to the pre-World War II “graphic novel” of such masters as Rockwell Kent. But if Trulli is paying obeisance to the graphic masters of an era well past, he is celebrating the cinematic masters of a more recent era, the American auteurs of the postwar period, movie craftspeople who could make a story gripping with the exquisitely balanced expoitation of acting, writing, and camera talent.