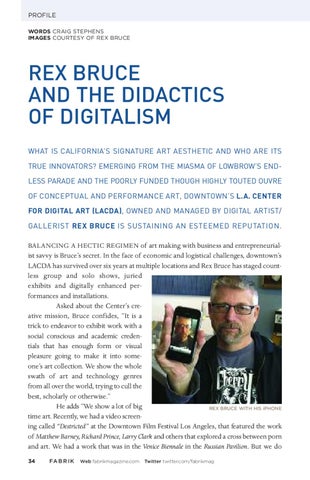 REX BRUCE AND THE DIDACTICS OF DIGITALISM WHAT IS CALIFORNIA’S SIGNATURE ART AESTHETIC AND WHO ARE ITS TRUE INNOVATORS? EMERGING FROM THE MIASMA OF LOWBROW’S ENDLESS PARADE AND THE POORLY FUNDED THOUGH HIGHLY TOUTED OUVRE OF CONCEPTUAL AND PERFORMANCE ART, DOWNTOWN’S L.A. CENTER FOR DIGITAL ART (LACDA), OWNED AND MANAGED BY DIGITAL ARTIST/ GALLERIST REX BRUCE IS SUSTAINING AN ESTEEMED REPUTATION. BALANCING A HECTIC REGIMEN of art making with business and entrepreneurial-

ist savvy is Bruce’s secret. In the face of economic and logistical challenges, downtown’s LACDA has survived over six years at multiple locations and Rex Bruce has staged countless group and solo shows, juried exhibits and digitally enhanced performances and installations. Asked about the Center’s creative mission, Bruce confides, “It is a trick to endeavor to exhibit work with a social conscious and academic credentials that has enough form or visual pleasure going to make it into someone’s art collection. We show the whole swath of art and technology genres from all over the world, trying to cull the best, scholarly or otherwise.” He adds “We show a lot of big REX BRUCE WITH HIS iPHONE time art. Recently, we had a video screening called “Destricted” at the Downtown Film Festival Los Angeles, that featured the work of Matthew Barney, Richard Prince, Larry Clark and others that explored a cross between porn and art. We had a work that was in the Venice Biennale in the Russian Pavilion. But we do 34