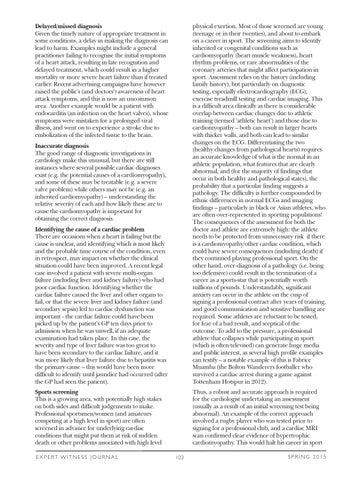 Identifying the cause of a cardiac problem There are occasions when a heart is failing but the cause is unclear, and identifying which is most likely and the probable time course of the condition, even in retrospect, may impact on whether the clinical situation could have been improved. A recent legal case involved a patient with severe multi-organ failure (including liver and kidney failure) who had poor cardiac function. Identifying whether the cardiac failure caused the liver and other organs to fail, or that the severe liver and kidney failure (and secondary sepsis) led to cardiac dysfunction was important - the cardiac failure could have been picked up by the patient’s GP ten days prior to admission when he was unwell, if an adequate examination had taken place. In this case, the severity and type of liver failure was too great to have been secondary to the cardiac failure, and it was more likely that liver failure due to hepatitis was the primary cause – this would have been more difficult to identify until jaundice had occurred (after the GP had seen the patient).

physical exertion. Most of those screened are young (teenage or in their twenties), and about to embark on a career in sport. The screening aims to identify inherited or congenital conditions such as cardiomyopathy (heart muscle weakness), heart rhythm problems, or rare abnormalities of the coronary arteries that might affect participation in sport. Assessment relies on the history (including family history), but particularly on diagnostic testing, especially electrocardiography (ECG), exercise treadmill testing and cardiac imaging. This is a difficult area clinically as there is considerable overlap between cardiac changes due to athletic training (termed ‘athletic heart’) and those due to cardiomyopathy – both can result in larger hearts with thicker walls, and both can lead to similar changes on the ECG. Differentiating the two (healthy changes from pathological hearts) requires an accurate knowledge of what is the normal in an athletic population, what features that are clearly abnormal, and (for the majority of findings that occur in both healthy and pathological states), the probability that a particular finding suggests a pathology. The difficulty is further compounded by ethnic differences in normal ECGs and imaging findings – particularly in black or Asian athletes, who are often over-represented in sporting populations! The consequences of the assessment for both the doctor and athlete are extremely high: the athlete needs to be protected from unnecessary risk if there is a cardiomyopathy/other cardiac condition, which could have severe consequences (including death) if they continued playing professional sport. On the other hand, over-diagnosis of a pathology (i.e. being too defensive) could result in the termination of a career as a sports-star that is potentially worth millions of pounds. Understandably, significant anxiety can occur in the athlete on the cusp of signing a professional contract after years of training, and good communication and sensitive handling are required. Some athletes are reluctant to be tested, for fear of a bad result, and sceptical of the outcome. To add to the pressure, a professional athlete that collapses while participating in sport (which is often televised) can generate huge media and public interest, as several high profile examples can testify – a notable example of this is Fabrice Muamba (the Bolton Wanderers footballer who survived a cardiac arrest during a game against Tottenham Hotspur in 2012).

Sports screening This is a growing area, with potentially high stakes on both sides and difficult judgements to make. Professional sportsmen/women (and amateurs competing at a high level in sport) are often screened in advance for underlying cardiac conditions that might put them at risk of sudden death or other problems associated with high level

Thus, a robust and accurate approach is required for the cardiologist undertaking an assessment (usually as a result of an initial screening test being abnormal). An example of the correct approach involved a rugby player who was tested prior to signing for a professional club, and a cardiac MRI scan confirmed clear evidence of hypertrophic cardiomyopathy. This would halt his career in sport

Delayed/missed diagnosis Given the timely nature of appropriate treatment in some conditions, a delay in making the diagnosis can lead to harm. Examples might include a general practitioner failing to recognise the initial symptoms of a heart attack, resulting in late recognition and delayed treatment, which could result in a higher mortality or more severe heart failure than if treated earlier. Recent advertising campaigns have however raised the public’s (and doctors’) awareness of heart attack symptoms, and this is now an uncommon area. Another example would be a patient with endocarditis (an infection on the heart valves), whose symptoms were mistaken for a prolonged viral illness, and went on to experience a stroke due to embolization of the infected tissue to the brain. Inaccurate diagnosis The good range of diagnostic investigations in cardiology make this unusual, but there are still instances where several possible cardiac diagnoses exist (e.g. the potential causes of a cardiomyopathy), and some of these may be treatable (e.g. a severe valve problem) while others may not be (e.g. an inherited cardiomyopathy) – understanding the relative severity of each and how likely these are to cause the cardiomyopathy is important for obtaining the correct diagnosis.