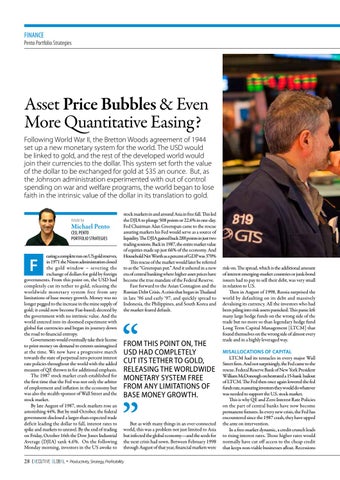 Asset Price Bubbles &amp; Even More Quantitative Easing? Following World War II, the Bretton Woods agreement of 1944 set up a new monetary system for the world. The USD would be linked to gold, and the rest of the developed world would join their currencies to the dollar. This system set forth the value of the dollar to be exchanged for gold at $35 an ounce. But, as the Johnson administration experimented with out of control spending on war and welfare programs, the world began to lose faith in the intrinsic value of the dollar in its translation to gold. Article by

earing a complete run on US gold reserves, in 1971 the Nixon administration closed the gold window – severing the exchange of dollars for gold by foreign governments. From this point on, the USD had completely cut its tether to gold, releasing the worldwide monetary system free from any limitations of base money growth. Money was no longer pegged to the increase in the mine supply of gold; it could now become Fiat-based; decreed by the government with no intrinsic value. And the world entered into its doomed experiment with global fiat currencies and began its journey down the road to financial entropy. Governments would eventually take their license to print money on demand to extents unimagined at the time. We now have a progressive march towards the state of perpetual zero percent interest rate policies throughout the world with the added measure of QE thrown in for additional emphasis. The 1987 stock market crash established for the first time that the Fed was not only the arbiter of employment and inflation in the economy but was also the stealth-sponsor of Wall Street and the stock market. By late August of 1987, stock markets rose an astonishing 44%. But by mid-October, the federal government disclosed a larger-than-expected trade deficit leading the dollar to fall, interest rates to spike and markets to unravel. By the end of trading on Friday, October 16th the Dow Jones Industrial Average (DJIA) sank 4.6%. On the following Monday morning, investors in the US awoke to

stock markets in and around Asia in free fall. This led the DJIA to plunge 508 points or 22.6% in one-day. Fed Chairman Alan Greenspan came to the rescue assuring markets his Fed would serve as a source of liquidity. The DJIA gained back 288 points in just two trading sessions. Back in 1987, the entire market value of equities made up just 66% of the economy. And Household Net Worth as a percent of GDP was 370% This rescue of the market would later be referred to as the “Greenspan put.” And it ushered in a new era of central banking where higher asset prices have become the true mandate of the Federal Reserve. Fast forward to the Asian Contagion and the Russian Debt Crisis. A crisis that began in Thailand in late ‘96 and early ‘97, and quickly spread to Indonesia, the Philippines, and South Korea and the market feared default.

FROM THIS POINT ON, THE USD HAD COMPLETELY CUT ITS TETHER TO GOLD, RELEASING THE WORLDWIDE MONETARY SYSTEM FREE FROM ANY LIMITATIONS OF BASE MONEY GROWTH.

But as with many things in an ever-connected world, this was a problem not just limited to Asia but infected the global economy—and the seeds for the next crisis had sown. Between February 1998 through August of that year, financial markets were

risk-on. The spread, which is the additional amount of interest emerging-market countries or junk-bond issuers had to pay to sell their debt, was very small in relation to U.S. Then in August of 1998, Russia surprised the world by defaulting on its debt and massively devaluing its currency. All the investors who had been piling into risk assets panicked. This panic left many large hedge funds on the wrong side of the trade but no more so than legendary hedge fund Long Term Capital Management [LTCM] that found themselves on the wrong side of almost every trade and in a highly leveraged way. MISALLOCATIONS OF CAPITAL LTCM had its tentacles in every major Wall Street firm. And not surprisingly, the Fed came to the rescue. Federal Reserve Bank of New York President William McDonough orchestrated a 15-bank bailout of LTCM. The Fed then once again lowered the fed funds rate, reassuring investors they would do whatever was needed to support the U.S. stock market. This is why QE and Zero Interest Rate Policies on the part of central banks have now become permanent fixtures. In every new crisis, the Fed has encountered since the 1987 crash, they have upped the ante on intervention. In a free-market dynamic, a credit crunch leads to rising interest rates. Those higher rates would normally have cut off access to the cheap credit that keeps non-viable businesses afloat. Recessions

The Premier Business and Luxury Lifestyle Magazine for C-Suite Executives and High Net Worth Individuals Worldwide. 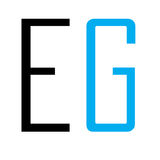