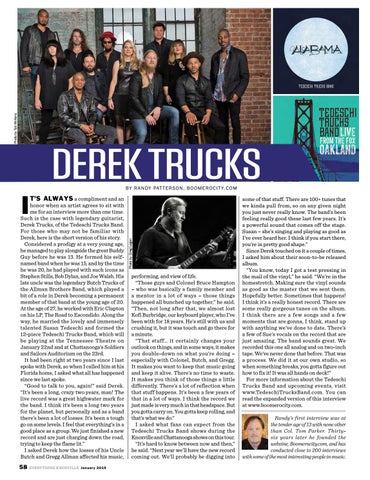 DEREK TRUCKS T’S ALWAYS a compliment and an

honor when an artist agrees to sit with me for an interview more than one time. Such is the case with legendary guitarist, Derek Trucks, of the Tedeschi Trucks Band. For those who may not be familiar with Derek, here is the short version of his story. Considered a prodigy at a very young age, he managed to play alongside the great Buddy Guy before he was 13. He formed his selfnamed band when he was 15, and by the time he was 20, he had played with such icons as Stephen Stills, Bob Dylan, and Joe Walsh. His late uncle was the legendary Butch Trucks of the Allman Brothers Band, which played a bit of a role in Derek becoming a permanent member of that band at the young age of 20. At the age of 27, he worked with Eric Clapton on his LP, The Road to Escondido. Along the way, he married the lovely and immensely talented Susan Tedeschi and formed the 12-piece Tedeschi Trucks Band, which will be playing at the Tennessee Theatre on January 22nd and at Chattanooga’s Soldiers and Sailors Auditorium on the 23rd. It had been right at two years since I last spoke with Derek, so when I called him at his Florida home, I asked what all has happened since we last spoke. “Good to talk to you, again!” said Derek. “It’s been a long, crazy two years, man! The live record was a great highwater mark for the band. I think it’s been a long two years for the planet, but personally and as a band there’s been a lot of losses. It’s been a tough go on some levels. I feel that everything’s in a good place as a group. We just finished a new record and are just charging down the road, trying to keep the flame lit.” I asked Derek how the losses of his Uncle Butch and Gregg Allman affected his music,

performing, and view of life. “Those guys and Colonel Bruce Hampton – who was basically a family member and a mentor in a lot of ways – those things happened all bunched up together,” he said. “Then, not long after that, we almost lost Kofi Burbridge, our keyboard player, who I’ve been with for 18 years. He’s still with us and crushing it, but it was touch and go there for a minute. “That stuff… it certainly changes your outlook on things, and in some ways, it makes you double-down on what you’re doing – especially with Colonel, Butch, and Gregg. It makes you want to keep that music going and keep it alive. There’s no time to waste. It makes you think of those things a little differently. There’s a lot of reflection when that stuff happens. It’s been a few years of that in a lot of ways. I think the record we just made is very much in that headspace. But you gotta carry on. You gotta keep rolling, and that’s what we do.” I asked what fans can expect from the Tedeschi Trucks Band shows during the Knoxville and Chattanooga shows on this tour. “It’s hard to know between now and then,” he said. “Next year we’ll have the new record coming out. We’ll probably be digging into

some of that stuff. There are 100+ tunes that we kinda pull from, so on any given night you just never really know. The band’s been feeling really good these last few years. It’s a powerful sound that comes off the stage. Susan – she’s singing and playing as good as I’ve ever heard her. I think if you start there, you’re in pretty good shape.” Since Derek touched on it a couple of times, I asked him about their soon-to-be released album. “You know, today I got a test pressing in the mail of the vinyl,” he said. “We’re in the homestretch. Making sure the vinyl sounds as good as the master that we sent them. Hopefully better. Sometimes that happens! I think it’s a really honest record. There are some really gorgeous tunes on the album. I think there are a few songs and a few moments that are gonna, I think, stand up with anything we’ve done to date. There’s a few of Sue’s vocals on the record that are just amazing. The band sounds great. We recorded this one all analog and on two-inch tape. We’ve never done that before. That was a process. We did it at our own studio, so when something breaks, you gotta figure out how to fix it! It was all hands on deck!” For more information about the Tedeschi Trucks Band and upcoming events, visit www.TedeschiTrucksBand.com. You can read the expanded version of this interview at www.boomerocity.com. Randy’s first interview was at the tender age of 13 with none other than Col. Tom Parker. Thirtysix years later he founded the webzine, Boomerocity.com, and has conducted close to 200 interviews with some of the most interesting people in music.