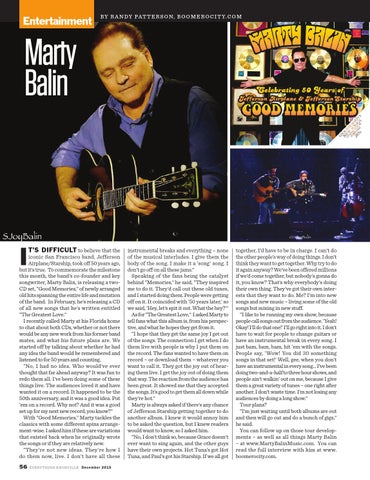 T’S DIFFICULT to believe that the

iconic San Francisco band, Jefferson Airplane/Starship, took off 50 years ago, but it’s true. To commemorate the milestone this month, the band’s co-founder and key songwriter, Marty Balin, is releasing a twoCD set, “Good Memories,” of newly arranged old hits spanning the entire life and mutation of the band. In February, he’s releasing a CD of all new songs that he’s written entitled “The Greatest Love.” I recently called Marty at his Florida home to chat about both CDs, whether or not there would be any new work from his former band mates, and what his future plans are. We started off by talking about whether he had any idea the band would be remembered and listened to for 50 years and counting. “No, I had no idea. Who would’ve ever thought that far ahead anyway? It was fun to redo them all. I’ve been doing some of these things live. The audiences loved it and have wanted it on a record. It happened to be the 50th anniversary, and it was a good idea. Put ‘em on a record. Why not? And it was a good set up for my next new record, you know?” With “Good Memories,” Marty tackles the classics with some different spins arrangement-wise. I asked him if these are variations that existed back when he originally wrote the songs or if they are relatively new. “They’re not new ideas. They’re how I do them now, live. I don’t have all these 56

instrumental breaks and everything – none of the musical interludes. I give them the body of the song. I make it a ‘song’ song. I don’t go off on all these jams.” Speaking of the fans being the catalyst behind “Memories,” he said, “They inspired me to do it. They’d call out these old tunes, and I started doing them. People were getting off on it. It coincided with ‘50 years later,’ so we said, ‘Hey, let’s spit it out. What the hey?’” As for “The Greatest Love,&quot; I asked Marty to tell fans what this album is, from his perspective, and what he hopes they get from it. “I hope that they get the same joy I get out of the songs. The connection I get when I do them live with people is why I put them on the record. The fans wanted to have them on record – or download them – whatever you want to call it. They got the joy out of hearing them live. I get the joy out of doing them that way. The reaction from the audience has been great. It showed me that they accepted the songs. It’s good to get them all down while they’re hot.” Marty is always asked if there’s any chance of Jefferson Starship getting together to do another album. I knew it would annoy him to be asked the question, but I knew readers would want to know, so I asked him. “No, I don’t think so, because Grace doesn’t ever want to sing again, and the other guys have their own projects. Hot Tuna’s got Hot Tuna, and Paul’s got his Starship. If we all got

together, I’d have to be in charge. I can’t do the other people’s way of doing things. I don’t think they want to get together. Why try to do it again anyway? We’ve been offered millions if we’d come together, but nobody’s gonna do it, you know? That’s why everybody’s doing their own thing. They’ve got their own interests that they want to do. Me? I’m into new songs and new music – living some of the old songs but mixing in new stuff. “I like to be running my own show, because people call songs out from the audience. ‘Yeah! Okay! I’ll do that one!’ I’ll go right into it. I don’t have to wait for people to change guitars or have an instrumental break in every song. I just bam, bam, bam, hit ‘em with the songs. People say, ‘Wow! You did 30 something songs in that set!’ Well, gee, when you don’t have an instrumental in every song... I’ve been doing two-and-a-half to three hour shows, and people ain’t walkin’ out on me, because I give them a great variety of tunes – one right after another. I don’t waste time. I’m not losing any audiences by doing a long show.” Tour plans? “I’m just waiting until both albums are out and then will go out and do a bunch of gigs,” he said. You can follow up on those tour developments – as well as all things Marty Balin – at www.MartyBalinMusic.com. You can read the full interview with him at www. boomerocity.com.