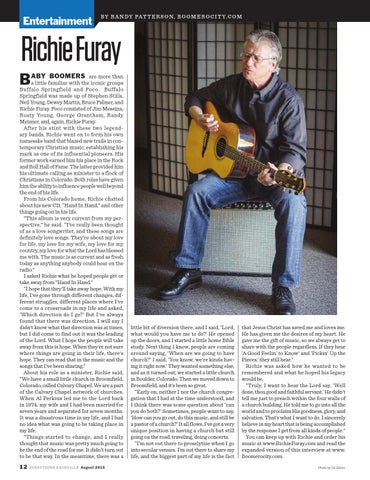 are more than a little familiar with the iconic groups Buffalo Springfield and Poco. Buffalo Springfield was made up of Stephen Stills, Neil Young, Dewey Martin, Bruce Palmer, and Richie Furay. Poco consisted of Jim Messina, Rusty Young, George Grantham, Randy Meisner, and, again, Richie Furay. After his stint with these two legendary bands, Richie went on to form his own namesake band that blazed new trails in contemporary Christian music, establishing his mark as one of its influential pioneers. His former work earned him his place in the Rock and Roll Hall of Fame. The latter provided him his ultimate calling as minister to a flock of Christians in Colorado. Both roles have given him the ability to influence people well beyond the end of his life. From his Colorado home, Richie chatted about his new CD, “Hand In Hand,” and other things going on in his life. “This album is very current from my perspective,” he said. “I’ve really been thought of as a love songwriter, and these songs are definitely love songs. They’re about my love for life, my love for my wife, my love for my country, my love for what the Lord has blessed me with. The music is as current and as fresh today as anything anybody could hear on the radio.” I asked Richie what he hoped people get or take away from “Hand In Hand.” “I hope that they’ll take away hope. With my life, I’ve gone through different changes, different struggles, different places where I’ve come to a crossroads in my life and asked, ‘Which direction do I go?’ But I’ve always found that there was direction. I will say I didn’t know what that direction was at times, but I did come to find out it was the leading of the Lord. What I hope the people will take away from this is hope. When they’re not sure where things are going in their life, there’s hope. They can read that in the music and the songs that I’ve been sharing.” About his role as a minister, Richie said, “We have a small little church in Broomfield, Colorado, called Calvary Chapel. We are a part of the Calvary Chapel network of churches. When Al Perkins led me to the Lord back in 1974, my wife and I had been married for seven years and separated for seven months. It was a disastrous time in my life, and I had no idea what was going to be taking place in my life. “Things started to change, and I really thought that music was pretty much going to be the end of the road for me. It didn’t turn out to be that way. In the meantime, there was a 12

little bit of diversion there, and I said, ‘Lord, what would you have me to do?’ He opened up the doors, and I started a little home Bible study. Next thing I know, people are coming around saying, ‘When are we going to have church?’ I said, ‘You know, we’re kinda having it right now.’ They wanted something else, and as it turned out, we started a little church in Boulder, Colorado. Then we moved down to Broomfield, and it’s been so great. “Early on, neither I nor the church congregation that I had at the time understood, and I think there was some question about ‘can you do both?’ Sometimes, people want to say, ‘How can you go out, do this music, and still be a pastor of a church?’ It all flows. I’ve got a very unique position in having a church but still going on the road, traveling, doing concerts. “I’m not out there to proselytize when I go into secular venues. I’m out there to share my life, and the biggest part of my life is the fact

that Jesus Christ has saved me and loves me. He has given me the desires of my heart. He gave me the gift of music, so we always get to share with the people regardless. If they hear ‘A Good Feelin’ to Know’ and ‘Pickin’ Up the Pieces,’ they still hear.” Richie was asked how he wanted to be remembered and what he hoped his legacy would be. “Truly, I want to hear the Lord say, ‘Well done, thou good and faithful servant.’ He didn’t tell me just to preach within the four walls of a church building. He told me to go into all the world and to proclaim His goodness, glory, and salvation. That’s what I want to do. I sincerely believe in my heart that is being accomplished by the response I get from all kinds of people.” You can keep up with Richie and order his music at www.RichieFuray.com and read the expanded version of this interview at www. Boomerocity.com. Photo by Ed Ziehm