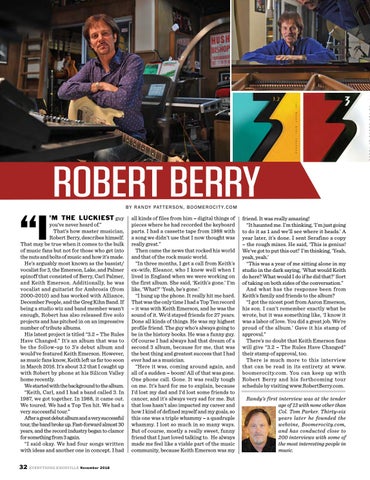 you’ve never heard of.” That’s how master musician, Robert Berry, describes himself. That may be true when it comes to the bulk of music fans but not for those who get into the nuts and bolts of music and how it’s made. He’s arguably most known as the bassist/ vocalist for 3, the Emerson, Lake, and Palmer spinoff that consisted of Berry, Carl Palmer, and Keith Emerson. Additionally, he was vocalist and guitarist for Ambrosia (from 2000-2010) and has worked with Alliance, December People, and the Greg Kihn Band. If being a studio wiz and band member wasn’t enough, Robert has also released five solo projects and has pitched in on an impressive number of tribute albums. His latest project is titled “3.2 – The Rules Have Changed.” It’s an album that was to be the follow-up to 3’s debut album and would’ve featured Keith Emerson. However, as music fans know, Keith left us far too soon in March 2016. It’s about 3.2 that I caught up with Robert by phone at his Silicon Valley home recently. We started with the background to the album. “Keith, Carl, and I had a band called 3. In 1987, we got together. In 1988, it came out. We toured. We had a Top Ten hit. We had a very successful tour.” After a great debut album and a very successful tour, the band broke up. Fast-forward almost 30 years, and the record industry began to clamor for something from 3 again. “I said okay. We had four songs written with ideas and another one in concept. I had

all kinds of files from him – digital things of pieces where he had recorded the keyboard parts. I had a cassette tape from 1988 with a song we didn’t use that I now thought was really great.” Then came the news that rocked his world and that of the rock music world. “In three months, I get a call from Keith’s ex-wife, Eleanor, who I knew well when I lived in England when we were working on the first album. She said, ‘Keith’s gone.’ I’m like, ‘What?’ ‘Yeah, he’s gone.’ “I hung up the phone. It really hit me hard. That was the only time I had a Top Ten record – it was with Keith Emerson, and he was the sound of it. We’d stayed friends for 27 years. Done all kinds of things. He was my highest profile friend. The guy who’s always going to be in the history books. He was a funny guy. Of course I had always had that dream of a second 3 album, because for me, that was the best thing and greatest success that I had ever had as a musician. “Here it was, coming around again, and all of a sudden – boom! All of that was gone. One phone call. Gone. It was really tough on me. It’s hard for me to explain, because I’d lost my dad and I’d lost some friends to cancer, and it’s always very sad for me. But that loss hasn’t also impacted my career and how I kind of defined myself and my goals, so this one was a triple whammy – a quadruple whammy. I lost so much in so many ways. But of course, mostly a really sweet, funny friend that I just loved talking to. He always made me feel like a viable part of the music community, because Keith Emerson was my

friend. It was really amazing! “It haunted me. I’m thinking, ‘I’m just going to do it as 1 and we’ll see where it heads.’ A year later, it’s done. I sent Serafino a copy – the rough mixes. He said, ‘This is genius! We’ve got to put this out!’ I’m thinking, ‘Yeah, yeah, yeah.’ “This was a year of me sitting alone in my studio in the dark saying, ‘What would Keith do here? What would I do if he did that?’ Sort of taking on both sides of the conversation.” And what has the response been from Keith’s family and friends to the album? “I got the nicest post from Aaron Emerson, his son. I can’t remember exactly what he wrote, but it was something like, ‘I know it was a labor of love. You did a great job. We’re proud of the album.’ Gave it his stamp of approval.” There’s no doubt that Keith Emerson fans will give “3.2 – The Rules Have Changed” their stamp of approval, too. There is much more to this interview that can be read in its entirety at www. boomerocity.com. You can keep up with Robert Berry and his forthcoming tour schedule by visiting www.RobertBerry.com. Randy’s first interview was at the tender age of 13 with none other than Col. Tom Parker. Thirty-six years later he founded the webzine, Boomerocity.com, and has conducted close to 200 interviews with some of the most interesting people in music.