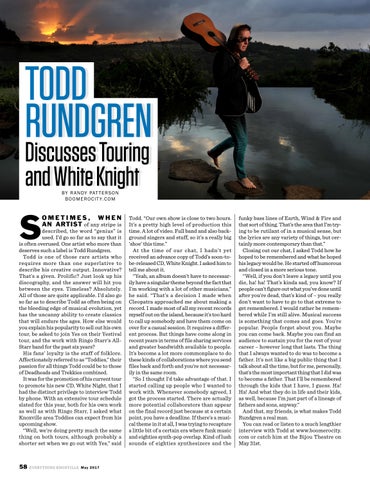 OMETIMES, WHEN AN ARTIST of any stripe is

described, the word “genius” is used. I’d go so far as to say that it is often overused. One artist who more than deserves such a label is Todd Rundgren. Todd is one of those rare artists who requires more than one superlative to describe his creative output. Innovative? That’s a given. Prolific? Just look up his discography, and the answer will hit you between the eyes. Timeless? Absolutely. All of those are quite applicable. I’d also go so far as to describe Todd as often being on the bleeding edge of musical evolution, yet has the uncanny ability to create classics that will endure the ages. How else would you explain his popularity to sell out his own tour, be asked to join Yes on their Yestival tour, and the work with Ringo Starr’s AllStarr band for the past six years? His fans’ loyalty is the stuff of folklore. Affectionately referred to as “Toddies,” their passion for all things Todd could be to those of Deadheads and Trekkies combined. It was for the promotion of his current tour to promote his new CD, White Night, that I had the distinct privilege to interview Todd by phone. With an extensive tour schedule slated for this year, both for his own work as well as with Ringo Starr, I asked what Knoxville area Toddies can expect from his upcoming show. “Well, we’re doing pretty much the same thing on both tours, although probably a shorter set when we go out with Yes,” said

Todd. “Our own show is close to two hours. It’s a pretty high level of production this time. A lot of video. Full band and also background singers and stuff, so it’s a really big ‘shoe’ this time.” At the time of our chat, I hadn’t yet received an advance copy of Todd’s soon-tobe-released CD, White Knight. I asked him to tell me about it. “Yeah, an album doesn’t have to necessarily have a singular theme beyond the fact that I’m working with a lot of other musicians,” he said. “That’s a decision I made when Cleopatra approached me about making a record. I made most of all my recent records myself out on the island, because it’s too hard to call up somebody and have them come on over for a casual session. It requires a different process. But things have come along in recent years in terms of file sharing services and greater bandwidth available to people. It’s become a lot more commonplace to do these kinds of collaborations where you send files back and forth and you’re not necessarily in the same room. “So I thought I’d take advantage of that. I started calling up people who I wanted to work with. Whenever somebody agreed, I got the process started. There are actually more potential collaborators than appear on the final record just because at a certain point, you have a deadline. If there’s a musical theme in it at all, I was trying to recapture a little bit of a certain era where funk music and eighties synth-pop overlap. Kind of lush sounds of eighties synthesizers and the

funky bass lines of Earth, Wind &amp; Fire and that sort of thing. That’s the area that I’m trying to be rutilant of in a musical sense, but the lyrics are any variety of things, but certainly more contemporary than that.” Closing out our chat, I asked Todd how he hoped to be remembered and what he hoped his legacy would be. He started off humorous and closed in a more serious tone. “Well, if you don’t leave a legacy until you die, ha! ha! That’s kinda sad, you know? If people can’t figure out what you’ve done until after you’re dead, that’s kind of – you really don’t want to have to go to that extreme to get remembered. I would rather be remembered while I’m still alive. Musical success is something that comes and goes. You’re popular. People forget about you. Maybe you can come back. Maybe you can find an audience to sustain you for the rest of your career – however long that lasts. The thing that I always wanted to do was to become a father. It’s not like a big public thing that I talk about all the time, but for me, personally, that’s the most important thing that I did was to become a father. That I’ll be remembered through the kids that I have, I guess. Ha! Ha! And what they do in life and their kids, as well, because I’m just part of a lineage of fathers and sons, anyway.” And that, my friends, is what makes Todd Rundgren a real man. You can read or listen to a much lengthier interview with Todd at www.boomerocity. com or catch him at the Bijou Theatre on May 31st.