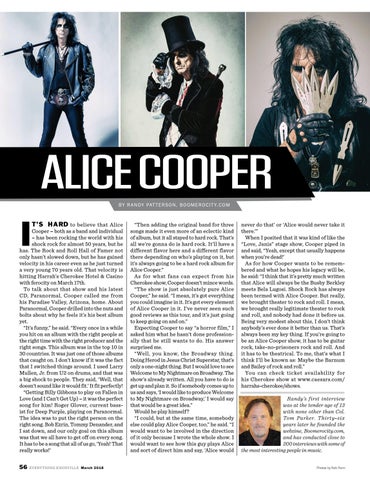 T’S HARD to believe that Alice

Cooper – both as a band and individual – has been rocking the world with his shock rock for almost 50 years, but he has. The Rock and Roll Hall of Famer not only hasn’t slowed down, but he has gained velocity in his career even as he just turned a very young 70 years old. That velocity is hitting Harrah’s Cherokee Hotel & Casino with ferocity on March 17th. To talk about that show and his latest CD, Paranormal, Cooper called me from his Paradise Valley, Arizona, home. About Paranormal, Cooper drilled into the nuts and bolts about why he feels it’s his best album yet. “It’s funny,” he said. “Every once in a while you hit on an album with the right people at the right time with the right producer and the right songs. This album was in the top 10 in 30 countries. It was just one of those albums that caught on. I don’t know if it was the fact that I switched things around. I used Larry Mullen, Jr. from U2 on drums, and that was a big shock to people. They said, ‘Well, that doesn’t sound like it would fit.’ It fit perfectly! “Getting Billy Gibbons to play on Fallen in Love (and I Can’t Get Up) – it was the perfect song for him! Roger Glover, current bassist for Deep Purple, playing on Paranormal. The idea was to put the right person on the right song. Bob Ezrin, Tommy Denander, and I sat down, and our only goal on this album was that we all have to get off on every song. It has to be a song that all of us go, ‘Yeah! That really works!’ 56

“Then adding the original band for three songs made it even more of an eclectic kind of album, but it all stayed to hard rock. That’s all we’re gonna do is hard rock. It’ll have a different flavor here and a different flavor there depending on who’s playing on it, but it’s always going to be a hard rock album for Alice Cooper.” As for what fans can expect from his Cherokee show, Cooper doesn’t mince words. “The show is just absolutely pure Alice Cooper,” he said. “I mean, it’s got everything you could imagine in it. It’s got every element of Alice Cooper in it. I’ve never seen such good reviews as this tour, and it’s just going to keep going on and on.” Expecting Cooper to say “a horror film,” I asked him what he hasn’t done professionally that he still wants to do. His answer surprised me. “Well, you know, the Broadway thing. Doing Herod in Jesus Christ Superstar, that’s only a one-night thing. But I would love to see Welcome to My Nightmare on Broadway. The show’s already written. All you have to do is get up and plan it. So if somebody comes up to us and says, ‘I would like to produce Welcome to My Nightmare on Broadway,’ I would say that would be a great idea.” Would he play himself ? “I could, but at the same time, somebody else could play Alice Cooper, too,” he said. “I would want to be involved in the direction of it only because I wrote the whole show. I would want to see how this guy plays Alice and sort of direct him and say, ‘Alice would

never do that’ or ‘Alice would never take it there.’” When I posited that it was kind of like the “Love, Janis” stage show, Cooper piped in and said, “Yeah, except that usually happens when you’re dead!’ As for how Cooper wants to be remembered and what he hopes his legacy will be, he said: “I think that it’s pretty much written that Alice will always be the Busby Berkley meets Bela Lugosi. Shock Rock has always been termed with Alice Cooper. But really, we brought theater to rock and roll. I mean, we brought really legitimate theater to rock and roll, and nobody had done it before us. Being very modest about this, I don’t think anybody’s ever done it better than us. That’s always been my key thing. If you’re going to be an Alice Cooper show, it has to be guitar rock, take-no-prisoners rock and roll. And it has to be theatrical. To me, that’s what I think I’ll be known as: Maybe the Barnum and Bailey of rock and roll.” You can check ticket availability for his Cherokee show at www.caesars.com/ harrahs-cherokee/shows. Randy’s first interview was at the tender age of 13 with none other than Col. Tom Parker. Thirty-six years later he founded the webzine, Boomerocity.com, and has conducted close to 200 interviews with some of the most interesting people in music. Photos by Rob Fenn