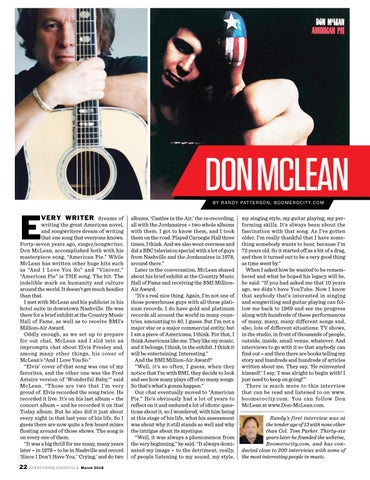 writing the great American novel, and songwriters dream of writing that one song that everyone knows. Forty-seven years ago, singer/songwriter, Don McLean, accomplished both with his masterpiece song, “American Pie.” While McLean has written other huge hits such as “And I Love You So” and “Vincent,” “American Pie” is THE song. The hit. The indelible mark on humanity and culture around the world. It doesn’t get much headier than that. I met with McLean and his publicist in his hotel suite in downtown Nashville. He was there for a brief exhibit at the Country Music Hall of Fame, as well as to receive BMI’s Million-Air Award. Oddly enough, as we set up to prepare for out chat, McLean and I slid into an impromptu chat about Elvis Presley and, among many other things, his cover of McLean’s “And I Love You So.” “Elvis’ cover of that song was one of my favorites, and the other one was the Fred Astaire version of ‘Wonderful Baby,’” said McLean. “Those are two that I’m very proud of. Elvis recorded the song twice. He recorded it live. It’s on his last album – the concert album – and he recorded it on that Today album. But he also did it just about every night in that last year of his life. So I guess there are now quite a few board mixes floating around of those shows. The song is on every one of them. “It was a big thrill for me many, many years later – in 1978 – to be in Nashville and record ‘Since I Don’t Have You,’ ‘Crying,’ and do two 22

albums, ‘Castles in the Air,’ the re-recording, all with the Jordanaires – two whole albums with them. I got to know them, and I took them on the road. Played Carnegie Hall three times, I think. And we also went overseas and did a BBC television special with a lot of guys from Nashville and the Jordanaires in 1978, around there.” Later in the conversation, McLean shared about his brief exhibit at the Country Music Hall of Fame and receiving the BMI MillionAir Award. “It’s a real nice thing. Again, I’m not one of those powerhouse guys with all these platinum records. I do have gold and platinum records all around the world in many countries, amounting to 40, I guess. But I’m not a major star or a major commercial entity, but I am a piece of Americana, I think. For that, I think Americans like me. They like my music, and it belongs, I think, in the exhibit. I think it will be entertaining. Interesting.” And the BMI Million-Air Award? “Well, it’s so often, I guess, when they notice that I’m with BMI, they decide to look and see how many plays off of so many songs. So that’s what’s gonna happen.” Our chat eventually moved to “American Pie.” He’s obviously had a lot of years to reflect on it and endured a lot of idiotic questions about it, so I wondered, with him being at this stage of his life, what his assessment was about why it still stands so well and why the intrigue about its mystique. “Well, it was always a phenomenon from the very beginning,” he said. “It always dominated my image – to the detriment, really, of people listening to my sound, my style,

my singing style, my guitar playing, my performing skills. It’s always been about the fascination with that song. As I’ve gotten older, I’m really thankful that I have something somebody wants to hear, because I’m 72 years old. So it started off as a bit of a drag, and then it turned out to be a very good thing as time went by.” When I asked how he wanted to be remembered and what he hoped his legacy will be, he said: “If you had asked me that 10 years ago, we didn’t have YouTube. Now I know that anybody that’s interested in singing and songwriting and guitar playing can follow me back to 1969 and see me progress along with hundreds of these performances of many, many, many different songs and, also, lots of different situations: TV shows, in the studio, in front of thousands of people, outside, inside, small venue, whatever. And interviews to go with it so that anybody can find out – and then there are books telling my story and hundreds and hundreds of articles written about me. They say, ‘He reinvented himself.’ I say, ‘I was alright to begin with! I just need to keep on going!’” There is much more to this interview that can be read and listened to on www. boomerocity.com. You can follow Don McLean at www.Don-McLean.com. Randy’s first interview was at the tender age of 13 with none other than Col. Tom Parker. Thirty-six years later he founded the webzine, Boomerocity.com, and has conducted close to 200 interviews with some of the most interesting people in music.