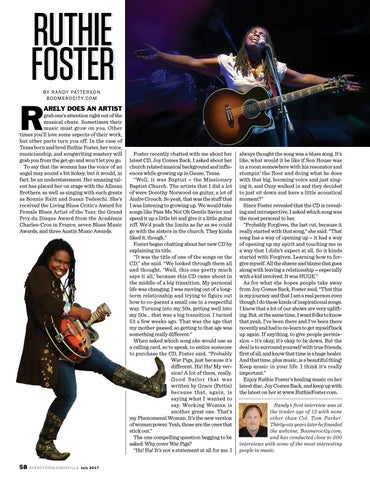 ARELY DOES AN ARTIST

grab one’s attention right out of the musical chute. Sometimes their music must grow on you. Other times you’ll love some aspects of their work, but other parts turn you off. In the case of Texas born and bred Ruthie Foster, her voice, musicianship, and songwriting mastery will grab you from the get-go and won’t let you go. To say that the woman has the voice of an angel may sound a bit hokey, but it would, in fact, be an understatement. Her amazing talent has placed her on stage with the Allman Brothers, as well as singing with such greats as Bonnie Raitt and Susan Tedeschi. She’s received the Living Blues Critic’s Award for Female Blues Artist of the Year, the Grand Prix du Disque Award from the Académie Charles-Cros in France, seven Blues Music Awards, and three Austin Music Awards.

Foster recently chatted with me about her latest CD, Joy Comes Back. I asked about her church related musical background and influences while growing up in Gause, Texas. “Well, it was Baptist – the Missionary Baptist Church. The artists that I did a lot of were Dorothy Norwood on guitar, a lot of Andre Crouch. So yeah, that was the stuff that I was listening to growing up. We would take songs like Pass Me Not Oh Gentle Savior and speed it up a little bit and give it a little guitar riff. We’d push the limits as far as we could go with the sisters in the church. They kinda liked it, though.” Foster began chatting about her new CD by explaining its title. “It was the title of one of the songs on the CD,” she said. “We looked through them all and thought, ‘Well, this one pretty much says it all,’ because this CD came about in the middle of a big transition. My personal life was changing. I was moving out of a longterm relationship and trying to figure out how to co-parent a small one in a respectful way. Turning into my 50s, getting well into my 50s… that was a big transition. I turned 53 a few weeks ago. That was the age that my mother passed, so getting to that age was something really different.” When asked which song she would use as a calling card, so to speak, to entice someone to purchase the CD, Foster said, “Probably War Pigs, just because it’s different. Ha! Ha! My version! A lot of them, really. Good Sailor that was written by Grace (Pettis) because that, again, is saying what I wanted to say. Working Woman is another great one. That’s my Phenomenal Woman. It’s the new version of woman power. Yeah, those are the ones that stick out.” The one compelling question begging to be asked: Why cover War Pigs? “Ha! Ha! It’s not a statement at all for me. I

always thought the song was a blues song. It’s like, what would it be like if Son House was in a room somewhere with his resonator and stompin’ the floor and doing what he does with that big, booming voice and just singing it, and Ozzy walked in and they decided to just sit down and have a little acoustical moment?” Since Foster revealed that the CD is revealing and introspective, I asked which song was the most personal to her. “Probably Forgiven, the last cut, because it really started with that song,” she said. “That song has a way of opening up – it had a way of opening up my spirit and touching me in a way that I didn’t expect at all. So it kinda started with Forgiven. Learning how to forgive myself. All the shame and blame that goes along with leaving a relationship – especially with a kid involved. It was HUGE.” As for what she hopes people take away from Joy Comes Back, Foster said, “That this is my journey and that I am a real person even though I do these kinds of inspirational songs. I know that a lot of our shows are very uplifting. But, at the same time, I want folks to know that yeah, I’ve been there and I’ve been there recently and had to re-learn to get myself back up again. If anything, to give people permission – it’s okay, it’s okay to be down. But the deal is to surround yourself with true friends, first of all, and know that time is a huge healer. And that time, plus music, is a beautiful thing! Keep music in your life. I think it’s really important.” Enjoy Ruthie Foster’s healing music on her latest disc, Joy Comes Back, and keep up with the latest on her at www.RuthieFoster.com. Randy’s first interview was at the tender age of 13 with none other than Col. Tom Parker. Thirty-six years later he founded the webzine, Boomerocity.com, and has conducted close to 200 interviews with some of the most interesting people in music.