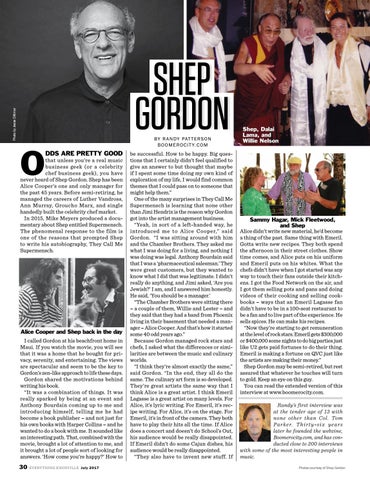 that unless you’re a real music business geek (or a celebrity chef business geek), you have never heard of Shep Gordon. Shep has been Alice Cooper’s one and only manager for the past 45 years. Before semi-retiring, he managed the careers of Luther Vandross, Ann Murray, Groucho Marx, and single handedly built the celebrity chef market. In 2015, Mike Meyers produced a documentary about Shep entitled Supermensch. The phenomenal response to the film is one of the reasons that prompted Shep to write his autobiography, They Call Me Supermensch.

Alice Cooper and Shep back in the day I called Gordon at his beachfront home in Maui. If you watch the movie, you will see that it was a home that he bought for privacy, serenity, and entertaining. The views are spectacular and seem to be the key to Gordon’s zen-like approach to life these days. Gordon shared the motivations behind writing his book. “It was a combination of things. It was really sparked by being at an event and Anthony Bourdain coming up to me and introducing himself, telling me he had become a book publisher – and not just for his own books with Harper Collins – and he wanted to do a book with me. It sounded like an interesting path. That, combined with the movie, brought a lot of attention to me, and it brought a lot of people sort of looking for answers. ‘How come you’re happy?’ How to 30

be successful. How to be happy. Big questions that I certainly didn’t feel qualified to give an answer to but thought that maybe if I spent some time doing my own kind of exploration of my life, I would find common themes that I could pass on to someone that might help them.” One of the many surprises in They Call Me Supermensch is learning that none other than Jimi Hendrix is the reason why Gordon got into the artist management business. “Yeah, in sort of a left-handed way, he introduced me to Alice Cooper,” said Gordon. “I was sitting around with him and the Chamber Brothers. They asked me what I was doing for a living, and nothing I was doing was legal. Anthony Bourdain said that I was a ‘pharmaceutical salesman.’ They were great customers, but they wanted to know what I did that was legitimate. I didn’t really do anything, and Jimi asked, ‘Are you Jewish?’ I am, and I answered him honestly. He said, ‘You should be a manager.’ “The Chamber Brothers were sitting there – a couple of them, Willie and Lester – and they said that they had a band from Phoenix living in their basement that needed a manager – Alice Cooper. And that’s how it started some 40 odd years ago.” Because Gordon managed rock stars and chefs, I asked what the differences or similarities are between the music and culinary worlds. “I think they’re almost exactly the same,” said Gordon. “In the end, they all do the same. The culinary art form is so developed. They’re great artists the same way that I think Alice is a great artist. I think Emeril Lagasse is a great artist on many levels. For Alice, it’s lyric writing. For Emeril, it’s recipe writing. For Alice, it’s on the stage. For Emeril, it’s in front of the camera. They both have to play their hits all the time. If Alice does a concert and doesn’t do School’s Out, his audience would be really disappointed. If Emeril didn’t do some Cajun dishes, his audience would be really disappointed. “They also have to invent new stuff. If

Sammy Hagar, Mick Fleetwood, and Shep Alice didn’t write new material, he’d become a thing of the past. Same thing with Emeril. Gotta write new recipes. They both spend the afternoon in their street clothes. Show time comes, and Alice puts on his uniform and Emeril puts on his whites. What the chefs didn’t have when I got started was any way to touch their fans outside their kitchens. I got the Food Network on the air, and I got them selling pots and pans and doing videos of their cooking and selling cookbooks – ways that an Emeril Lagasse fan didn’t have to be in a 100-seat restaurant to be a fan and to live part of the experience. He sells spices. He can make his recipes. “Now they’re starting to get remuneration at the level of rock stars. Emeril gets $300,000 or $400,000 some nights to do big parties just like U2 gets paid fortunes to do their thing. Emeril is making a fortune on QVC just like the artists are making their money.” Shep Gordon may be semi-retired, but rest assured that whatever he touches will turn to gold. Keep an eye on this guy. You can read the extended version of this interview at www.boomerocity.com. Randy’s first interview was at the tender age of 13 with none other than Col. Tom Parker. Thirty -six years later he founded the webzine, Boomerocity.com, and has conducted close to 200 interviews with some of the most interesting people in music. Photos courtesy of Shep Gordon