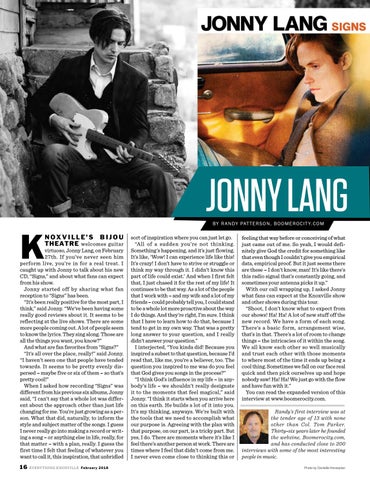 virtuoso, Jonny Lang, on February 27th. If you’ve never seen him perform live, you’re in for a real treat. I caught up with Jonny to talk about his new CD, “Signs,” and about what fans can expect from his show. Jonny started off by sharing what fan reception to “Signs” has been. “It’s been really positive for the most part, I think,” said Jonny. “We’ve been having some really good reviews about it. It seems to be reflecting at the live shows. There are some more people coming out. A lot of people seem to know the lyrics. They sing along. Those are all the things you want, you know?” And what are fan favorites from “Signs?” “It’s all over the place, really!” said Jonny. “I haven’t seen one that people have tended towards. It seems to be pretty evenly dispersed – maybe five or six of them – so that’s pretty cool!” When I asked how recording “Signs” was different from his previous six albums, Jonny said, “I can’t say that a whole lot was different about the approach other than just life changing for me. You’re just growing as a person. What that did, naturally, to inform the style and subject matter of the songs. I guess I never really go into making a record or writing a song – or anything else in life, really, for that matter – with a plan, really. I guess the first time I felt that feeling of whatever you want to call it, this inspiration, that unbridled

sort of inspiration where you can just let go. “All of a sudden you’re not thinking. Something’s happening, and it’s just flowing. It’s like, ‘Wow! I can experience life like this! It’s crazy! I don’t have to strive or struggle or think my way through it. I didn’t know this part of life could exist.’ And when I first felt that, I just chased it for the rest of my life! It continues to be that way. As a lot of the people that I work with – and my wife and a lot of my friends – could probably tell you, I could stand to be a whole lot more proactive about the way I do things. And they’re right, I’m sure. I think that I have to learn how to do that, because I tend to get in my own way. That was a pretty long answer to your question, and I really didn’t answer your question.” I interjected, “You kinda did! Because you inspired a subset to that question, because I’d read that, like me, you’re a believer, too. The question you inspired to me was do you feel that God gives you songs in the process?” “I think God’s influence in my life – in anybody’s life – we shouldn’t really designate it to the moments that feel magical,” said Jonny. “I think it starts when you arrive here on this earth. He builds a lot of it into you. It’s my thinking, anyways. We’re built with the tools that we need to accomplish what our purpose is. Agreeing with the plan with that purpose, on our part, is a tricky part. But yes, I do. There are moments where it’s like I feel there’s another person at work. There are times where I feel that didn’t come from me. I never even come close to thinking this or

feeling that way before or conceiving of what just came out of me. So yeah, I would definitely give God the credit for something like that even though I couldn’t give you empirical data, empirical proof. But it just seems there are these – I don’t know, man! It’s like there’s this radio signal that’s constantly going, and sometimes your antenna picks it up.” With our call wrapping up, I asked Jonny what fans can expect at the Knoxville show and other shows during this tour. “Shoot, I don’t know what to expect from our shows! Ha! Ha! A lot of new stuff off the new record. We have a form of each song. There’s a basic form, arrangement wise, that’s in that. There’s a lot of room to change things – the intricacies of it within the song. We all know each other so well musically and trust each other with those moments to where most of the time it ends up being a cool thing. Sometimes we fall on our face real quick and then pick ourselves up and hope nobody saw! Ha! Ha! We just go with the flow and have fun with it.” You can read the expanded version of this interview at www.boomerocity.com. Randy’s first interview was at the tender age of 13 with none other than Col. Tom Parker. Thirty-six years later he founded the webzine, Boomerocity.com, and has conducted close to 200 interviews with some of the most interesting people in music. Photo by Daniella Hovsepian