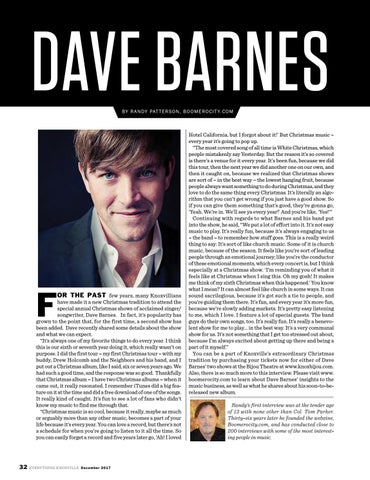 OR THE PAST few years, many Knoxvillians

have made it a new Christmas tradition to attend the special annual Christmas shows of acclaimed singer/ songwriter, Dave Barnes. In fact, it’s popularity has grown to the point that, for the first time, a second show has been added. Dave recently shared some details about the show and what we can expect. “It’s always one of my favorite things to do every year. I think this is our sixth or seventh year doing it, which really wasn’t on purpose. I did the first tour – my first Christmas tour – with my buddy, Drew Holcomb and the Neighbors and his band, and I put out a Christmas album, like I said, six or seven years ago. We had such a good time, and the response was so good. Thankfully that Christmas album – I have two Christmas albums – when it came out, it really resonated. I remember iTunes did a big feature on it at the time and did a free download of one of the songs. It really kind of caught. It’s fun to see a lot of fans who didn’t know my music to find me through that. “Christmas music is so cool, because it really, maybe as much or arguably more than any other music, becomes a part of your life because it’s every year. You can love a record, but there’s not a schedule for when you’re going to listen to it all the time. So you can easily forget a record and five years later go, ‘Ah! I loved

Hotel California, but I forgot about it!’ But Christmas music – every year it’s going to pop up. “The most covered song of all time is White Christmas, which people mistakenly say Yesterday. But the reason it’s so covered is there’s a venue for it every year. It’s been fun, because we did this tour, then the next year we did another one on our own, and then it caught on, because we realized that Christmas shows are sort of – in the best way – the lowest hanging fruit, because people always want something to do during Christmas, and they love to do the same thing every Christmas. It’s literally an algorithm that you can’t get wrong if you just have a good show. So if you can give them something that’s good, they’re gonna go, ‘Yeah. We’re in. We’ll see ya every year!’ And you’re like, ‘Yes!’” Continuing with regards to what Barnes and his band put into the show, he said, “We put a lot of effort into it. It’s not easy music to play. It’s really fun, because it’s always engaging to us – the band – to remember how stuff goes. This is a really weird thing to say: It’s sort of like church music. Some of it is church music, because of the season. It feels like you’re sort of leading people through an emotional journey; like you’re the conductor of these emotional moments, which every concert is, but I think especially at a Christmas show. ‘I’m reminding you of what it feels like at Christmas when I sing this. Oh my gosh! It makes me think of my sixth Christmas when this happened.’ You know what I mean? It can almost feel like church in some ways. It can sound sacrilegious, because it’s got such a tie to people, and you’re guiding them there. It’s fun, and every year it’s more fun, because we’re slowly adding markets. It’s pretty easy listening to me, which I love. I feature a lot of special guests. The band guys do their own songs, too. It’s really fun. It’s really a benevolent show for me to play... in the best way. It’s a very communal show for us. It’s not something that I get too stressed out about, because I’m always excited about getting up there and being a part of it myself.” You can be a part of Knoxville’s extraordinary Christmas tradition by purchasing your tickets now for either of Dave Barnes’ two shows at the Bijou Theatre at www.knoxbijou.com. Also, there is so much more to this interview. Please visit www. boomerocity.com to learn about Dave Barnes’ insights to the music business, as well as what he shares about his soon-to-bereleased new album. Randy’s first interview was at the tender age of 13 with none other than Col. Tom Parker. Thirty-six years later he founded the webzine, Boomerocity.com, and has conducted close to 200 interviews with some of the most interesting people in music.