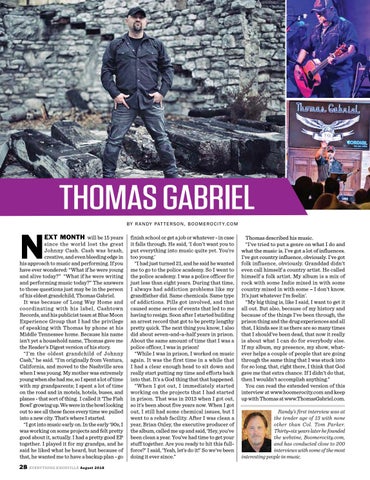 EXT MONTH will be 15 years

since the world lost the great Johnny Cash. Cash was brash, creative, and even bleeding edge in his approach to music and performing. If you have ever wondered: “What if he were young and alive today?” “What if he were writing and performing music today?” The answers to those questions just may be in the person of his eldest grandchild, Thomas Gabriel. It was because of Long Way Home and coordinating with his label, Cashtown Records, and his publicist team at Blue Moon Experience Group that I had the privilege of speaking with Thomas by phone at his Middle Tennessee home. Because his name isn’t yet a household name, Thomas gave me the Reader’s Digest version of his story. “I’m the oldest grandchild of Johnny Cash,” he said. “I’m originally from Ventura, California, and moved to the Nashville area when I was young. My mother was extremely young when she had me, so I spent a lot of time with my grandparents; I spent a lot of time on the road and in motels, hotels, buses, and planes - that sort of thing. I called it ‘The Fish Bowl’ growing up. We were in the bowl looking out to see all these faces every time we pulled into a new city. That’s where I started. “I got into music early on. In the early ‘90s, I was working on some projects and felt pretty good about it, actually. I had a pretty good EP together. I played it for my grandpa, and he said he liked what he heard, but because of that, he wanted me to have a backup plan - go

finish school or get a job or whatever - in case it falls through. He said, ‘I don’t want you to put everything into music quite yet. You’re too young.’ “I had just turned 21, and he said he wanted me to go to the police academy. So I went to the police academy. I was a police officer for just less than eight years. During that time, I always had addiction problems like my grandfather did. Same chemicals. Same type of addictions. Pills got involved, and that caused some series of events that led to me having to resign. Soon after I started building an arrest record that got to be pretty lengthy pretty quick. The next thing you know, I also did about seven-and-a-half years in prison. About the same amount of time that I was a police officer, I was in prison! “While I was in prison, I worked on music again. It was the first time in a while that I had a clear enough head to sit down and really start putting my time and efforts back into that. It’s a God thing that that happened. “When I got out, I immediately started working on the projects that I had started in prison. That was in 2013 when I got out, so it’s been about five years now. When I got out, I still had some chemical issues, but I went to a rehab facility. After I was clean a year, Brian Oxley, the executive producer of the album, called me up and said, ‘Hey, you’ve been clean a year. You’ve had time to get your stuff together. Are you ready to hit this fullforce?’ I said, ‘Yeah, let’s do it!’ So we’ve been doing it ever since.”

Thomas described his music. “I’ve tried to put a genre on what I do and what the music is. I’ve got a lot of influences. I’ve got country influence, obviously. I’ve got folk influence, obviously. Granddad didn’t even call himself a country artist. He called himself a folk artist. My album is a mix of rock with some Indie mixed in with some country mixed in with some – I don’t know. It’s just whatever I’m feelin’. “My big thing is, like I said, I want to get it all out. But also, because of my history and because of the things I’ve been through, the prison thing and the drug experiences and all that, I kinda see it as there are so many times that I should’ve been dead, that now it really is about what I can do for everybody else. If my album, my presence, my show, whatever helps a couple of people that are going through the same thing that I was stuck into for so long, that, right there, I think that God gave me that extra chance. If I didn’t do that, then I wouldn’t accomplish anything.” You can read the extended version of this interview at www.boomerocity.com and keep up with Thomas at www.ThomasGabriel.com. Randy’s first interview was at the tender age of 13 with none other than Col. Tom Parker. Thirty-six years later he founded the webzine, Boomerocity.com, and has conducted close to 200 interviews with some of the most interesting people in music.