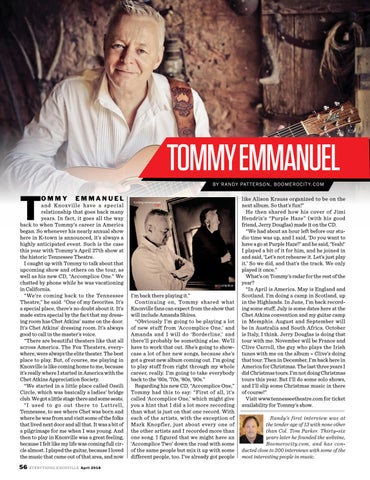 and Knoxville have a special relationship that goes back many years. In fact, it goes all the way back to when Tommy’s career in America began. So whenever his nearly annual show here in K-town is announced, it’s always a highly anticipated event. Such is the case this year with Tommy’s April 27th show at the historic Tennessee Theatre. I caught up with Tommy to talk about that upcoming show and others on the tour, as well as his new CD, “Accomplice One.” We chatted by phone while he was vacationing in California. “We’re coming back to the Tennessee Theatre,” he said. “One of my favorites. It’s a special place, there’s no doubt about it. It’s made extra special by the fact that my dressing room has Chet Atkins’ name on the door. It’s Chet Atkins’ dressing room. It’s always good to call in the master’s voice. “There are beautiful theaters like that all across America. The Fox Theaters, everywhere, were always the elite theater. The best place to play. But, of course, me playing in Knoxville is like coming home to me, because it’s really where I started in America with the Chet Atkins Appreciation Society. “We started in a little place called Ossili Circle, which was basically a ladies’ bridge club. We got a little stage there and some seats. “I used to go out there to Luttrell, Tennessee, to see where Chet was born and where he was from and visit some of the folks that lived next door and all that. It was a bit of a pilgrimage for me when I was young. And then to play in Knoxville was a great feeling, because I felt like my life was coming full circle almost. I played the guitar, because I loved the music that came out of that area, and now 56

I’m back there playing it.” Continuing on, Tommy shared what Knoxville fans can expect from the show that will include Amanda Shires. “Obviously I’m going to be playing a lot of new stuff from ‘Accomplice One,’ and Amanda and I will do ‘Borderline,’ and there’ll probably be something else. We’ll have to work that out. She’s going to showcase a lot of her new songs, because she’s got a great new album coming out. I’m going to play stuff from right through my whole career, really. I’m going to take everybody back to the ’60s, ’70s, ’80s, ’90s." Regarding his new CD, “Accomplice One,” Tommy had this to say: “First of all, it’s called ‘Accomplice One,’ which might give you a hint that I did a lot more recording than what is just on that one record. With each of the artists, with the exception of Mark Knopfler, just about every one of the other artists and I recorded more than one song. I figured that we might have an ‘Accomplice Two’ down the road with some of the same people but mix it up with some different people, too. I’ve already got people

like Alison Krauss organized to be on the next album. So that’s fun!” He then shared how his cover of Jimi Hendrix’s “Purple Haze” (with his good friend, Jerry Douglas) made it on the CD. “We had about an hour left before our studio time was up, and I said, ‘Do you want to have a go at Purple Haze?’ and he said, ‘Yeah!’ I played a bit of it for him, and he joined in and said, ‘Let’s not rehearse it. Let’s just play it.’ So we did, and that’s the track. We only played it once.” What’s on Tommy’s radar for the rest of the year? “In April is America. May is England and Scotland. I’m doing a camp in Scotland, up in the Highlands. In June, I’m back recording some stuff. July is some dates here at the Chet Atkins convention and my guitar camp in Memphis. August and September will be in Australia and South Africa. October is Italy, I think. Jerry Douglas is doing that tour with me. November will be France and Clive Carroll, the guy who plays the Irish tunes with me on the album – Clive’s doing that tour. Then in December, I’m back here in America for Christmas. The last three years I did Christmas tours. I’m not doing Christmas tours this year. But I’ll do some solo shows, and I’ll slip some Christmas music in there of course!” Visit www.tennesseetheatre.com for ticket availability for Tommy’s show. Randy’s first interview was at the tender age of 13 with none other than Col. Tom Parker. Thirty-six years later he founded the webzine, Boomerocity.com, and has conducted close to 200 interviews with some of the most interesting people in music.