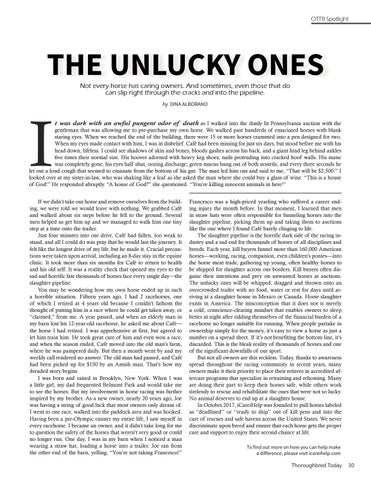 The Unlucky Ones Not every horse has caring owners. And sometimes, even those that do can slip right through the cracks and into the pipeline.

gentleman that was allowing me to pre-purchase my own horse. We walked past hundreds of emaciated horses with blank staring eyes. When we reached the end of the building, there were 15 or more horses crammed into a pen designed for two. When my eyes made contact with him, I was in disbelief. Café had been missing for just six days, but stood before me with his head down, lifeless. I could see shadows of skin and bones, bloody gashes across his back, and a giant hind leg behind ankles five times their normal size. His hooves adorned with heavy keg shoes, nails protruding into cracked hoof walls. His mane was completely gone; his eyes half shut, oozing discharge; green mucus hung out of both nostrils; and every three seconds he let out a loud cough that seemed to emanate from the bottom of his gut. The man led him out and said to me, “That will be $2,500.” I looked over at my sister-in-law, who was shaking like a leaf as she asked the man where she could buy a glass of wine. “This is a house of God!” He responded abruptly. “A house of God?” she questioned. “You’re killing innocent animals in here!” If we didn’t take our horse and remove ourselves from the building, we were told we would leave with nothing. We grabbed Café and walked about six steps before he fell to the ground. Several men helped us get him up and we managed to walk him one tiny step at a time onto the trailer. Just four minutes into our drive, Café had fallen, too weak to stand, and all I could do was pray that he would last the journey. It felt like the longest drive of my life, but he made it. Crucial precautions were taken upon arrival, including an 8-day stay in the equine clinic. It took more than six months for Café to return to health and his old self. It was a reality check that opened my eyes to the sad and horrific fate thousands of horses face every single day—the slaughter pipeline. You may be wondering how my own horse ended up in such a horrible situation. Fifteen years ago, I had 2 racehorses, one of which I retired at 4 years old because I couldn’t fathom the thought of putting him in a race where he could get taken away, or “claimed,” from me. A year passed, and when an elderly man in my barn lost his 12-year-old racehorse, he asked me about Café— the horse I had retired. I was apprehensive at first, but agreed to let him train him. He took great care of him and even won a race, and when the season ended, Café moved into the old man’s farm, where he was pampered daily. But then a month went by and my weekly call rendered no answer. The old man had passed, and Café had been picked up for $150 by an Amish man. That’s how my dreaded story begins. I was born and raised in Brooklyn, New York. When I was a little girl, my dad frequented Belmont Park and would take me to see the horses. But my involvement in horse racing was further inspired by my brother. As a new owner, nearly 20 years ago, Joe was having a string of good luck that most owners only dream of. I went to one race, walked into the paddock area and was hooked. Having been a pre-Olympic runner my entire life, I saw myself in every racehorse. I became an owner, and it didn’t take long for me to question the safety of the horses that weren’t very good or could no longer run. One day, I was in my barn when I noticed a man wearing a straw hat, loading a horse into a trailer. Joe ran from the other end of the barn, yelling, “You’re not taking Francesco!”

Francesco was a high-priced yearling who suffered a career ending injury the month before. In that moment, I learned that men in straw hats were often responsible for funneling horses into the slaughter pipeline, picking them up and taking them to auctions like the one where I found Café barely clinging to life. The slaughter pipeline is the horrific dark side of the racing industry and a sad end for thousands of horses of all disciplines and breeds. Each year, kill buyers funnel more than 160,000 American horses—working, racing, companion, even children’s ponies—into the horse meat trade, gathering up young, often healthy horses to be shipped for slaughter across our borders. Kill buyers often disguise their intentions and prey on unwanted horses at auctions. The unlucky ones will be whipped, dragged and thrown onto an overcrowded trailer with no food, water or rest for days until arriving at a slaughter house in Mexico or Canada. Horse slaughter exists in America. The misconception that it does not is merely a cold, conscience-clearing mindset that enables owners to sleep better at night after ridding themselves of the financial burden of a racehorse no longer suitable for running. When people partake in ownership simply for the money, it’s easy to view a horse as just a number on a spread sheet. If it’s not benefiting the bottom line, it’s discarded. This is the bleak reality of thousands of horses and one of the significant downfalls of our sport. But not all owners are this reckless. Today, thanks to awareness spread throughout the racing community in recent years, many owners make it their priority to place their retirees in accredited aftercare programs that specialize in retraining and rehoming. Many are doing their part to keep their horses safe, while others work tirelessly to rescue and rehabilitate the ones that were not so lucky. No animal deserves to end up at a slaughter house. In October 2017, iCareiHelp was founded to pull horses labeled as ‘’deadlined’’ or ‘’ready to ship’’ out of kill pens and into the care of rescues and safe havens across the United States. We never discriminate upon breed and ensure that each horse gets the proper care and support to enjoy their second chance at life. To find out more on how you can help make a difference, please visit icareihelp.com 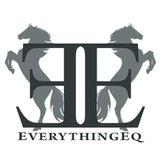