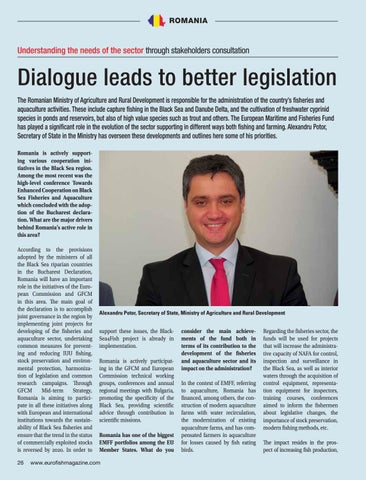 Understanding the needs of the sector through stakeholders consultation

Dialogue leads to better legislation The Romanian Ministry of Agriculture and Rural Development is responsible for the administration of the countryâ&#x20AC;&#x2122;s ďŹ sheries and aquaculture activities. These include capture ďŹ shing in the Black Sea and Danube Delta, and the cultivation of freshwater cyprinid species in ponds and reservoirs, but also of high value species such as trout and others. The European Maritime and Fisheries Fund has played a signiďŹ cant role in the evolution of the sector supporting in different ways both ďŹ shing and farming. Alexandru Potor, Secretary of State in the Ministry has overseen these developments and outlines here some of his priorities. Romania is actively supporting various cooperation initiatives in the Black Sea region. Among the most recent was the high-level conference Towards Enhanced Cooperation on Black Sea Fisheries and Aquaculture which concluded with the adoption of the Bucharest declaration. What are the major drivers behind Romaniaâ&#x20AC;&#x2122;s active role in this area? According to the provisions adopted by the ministers of all the Black Sea riparian countries in the Bucharest Declaration, Romania will have an important role in the initiatives of the European Commission and GFCM in this area. The main goal of the declaration is to accomplish joint governance in the region by implementing joint projects for developing of the fisheries and aquaculture sector, undertaking common measures for preventing and reducing IUU fishing, stock preservation and environmental protection, harmonization of legislation and common research campaigns.Â Through GFCM Mid-term Strategy, Romania is aiming to participate in all these initiatives along with European and international institutions towardsÂ  the sustainability of Black Sea fisheries and ensure that the trend in the status of commercially exploited stocks is reversed by 2020. In order to

support these issues, the BlackSea4Fish project is already in implementation. Romania is actively participating in the GFCM and European Commission technical working groups, conferences and annual regional meetings with Bulgaria, promoting the specificity of the Black Sea, providing scientific advice through contribution in scientific missions. Romania has one of the biggest EMFF portfolios among the EU Member States. What do you

consider the main achievements of the fund both in terms of its contribution to the development of the fisheries and aquaculture sector and its impact on the administration? In the context of EMFF, referring to aquaculture, Romania has financed, among others, the construction of modern aquaculture farms with water recirculation, the modernization of existing aquaculture farms, and has compensated farmers in aquaculture for losses caused by fish eating birds.

Regarding the fisheries sector, the funds will be used for projects that will increase the administrative capacity of NAFA for control, inspection and surveillance in the Black Sea, as well as interior waters through the acquisition of control equipment, representation equipment for inspectors, training courses, conferences aimed to inform the fishermen about legislative changes, the importance of stock preservation, modern fishing methods, etc. The impact resides in the prospect of increasing fish production,