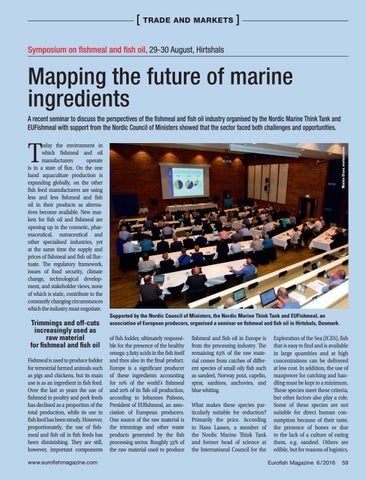 Mapping the future of marine ingredients A recent seminar to discuss the perspectives of the fishmeal and fish oil industry organised by the Nordic Marine Think Tank and EUFishmeal with support from the Nordic Council of Ministers showed that the sector faced both challenges and opportunities.

Trimmings and ­off-cuts increasingly used as raw material for ­fishmeal and fish oil Fishmeal is used to produce fodder for terrestrial farmed animals such as pigs and chickens, but its main use is as an ingredient in fish feed. Over the last 10 years the use of fishmeal in poultry and pork feeds has declined as a proportion of the total production, while its use in fish feed has been steady. However, proportionately, the use of fishmeal and fish oil in fish feeds has been diminishing. They are still, however, important ­ components www.eurofishmagazine.com

oday the environment in which fishmeal and oil manufacturers operate is in a state of flux. On the one hand aquaculture production is expanding globally, on the other fish feed manufacturers are using less and less fishmeal and fish oil in their products as alternatives become available. New markets for fish oil and fishmeal are opening up in the cosmetic, pharmaceutical, nutraceutical and other specialised industries, yet at the same time the supply and prices of fishmeal and fish oil fluctuate. The regulatory framework, issues of food security, climate change, technological development, and stakeholder views, none of which is static, contribute to the constantly changing circumstances which the industry must negotiate. Supported by the Nordic Council of Ministers, the Nordic Marine Think Tank and EUFishmeal, an association of European producers, organised a seminar on fishmeal and fish oil in Hirtshals, Denmark.

of fish fodder, ultimately responsible for the presence of the healthy omega-3 fatty acids in the fish itself and thus also in the final product. Europe is a significant producer of these ingredients accounting for 10% of the world’s fishmeal and 20% of its fish oil production, according to Johannes Palsson, President of EUfishmeal, an association of European producers. One source of the raw material is the trimmings and other waste products generated by the fish processing sector. Roughly 35% of the raw material used to produce

fishmeal and fish oil in Europe is from the processing industry. The remaining 65% of the raw material comes from catches of different species of small oily fish such as sandeel, Norway pout, capelin, sprat, sardines, anchovies, and blue whiting. What makes these species particularly suitable for reduction? Primarily the price. According to Hans Lassen, a member of the Nordic Marine Think Tank and former head of science at the International Council for the

Exploration of the Sea (ICES), fish that is easy to find and is available in large quantities and at high concentrations can be delivered at low cost. In addition, the use of manpower for catching and handling must be kept to a minimum. These species meet these criteria, but other factors also play a role. Some of these species are not suitable for direct human consumption because of their taste, the presence of bones or due to the lack of a culture of e­ ating them, e.g. sandeel. Others are edible, but for reasons of logistics, Eurofish Magazine 6 / 2016