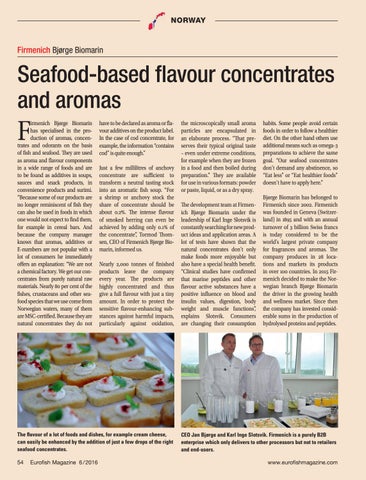 irmenich Bjørge Biomarin has specialised in the production of aromas, concentrates and odorants on the basis of fish and seafood. They are used as aroma and flavour components in a wide range of foods and are to be found as additives in soups, sauces and snack products, in convenience products and surimi. “Because some of our products are no longer reminiscent of fish they can also be used in foods in which one would not expect to find them, for example in cereal bars. And because the company manager knows that aromas, additives or E-numbers are not popular with a lot of consumers he immediately offers an explanation: “We are not a chemical factory. We get our concentrates from purely natural raw materials. Nearly 80 per cent of the fishes, crustaceans and other seafood species that we use come from Norwegian waters, many of them are MSC-certified. Because they are natural concentrates they do not

have to be declared as aroma or flavour additives on the product label. In the case of cod concentrate, for example, the information “contains cod” is quite enough.” Just a few millilitres of anchovy concentrate are sufficient to transform a neutral tasting stock into an aromatic fish soup. “For a shrimp or anchovy stock the share of concentrate should be about 0.2. The intense flavour of smoked herring can even be achieved by adding only 0.1 of the concentrate”, Tormod Thomsen, CEO of Firmenich Bjørge Biomarin, informed us. Nearly 2,000 tonnes of finished products leave the company every year. The products are highly concentrated and thus give a full flavour with just a tiny amount. In order to protect the sensitive flavour-enhancing substances against harmful impacts, particularly against oxidation,

The flavour of a lot of foods and dishes, for example cream cheese, can easily be enhanced by the addition of just a few drops of the right seafood concentrates. 54

the microscopically small aroma particles are encapsulated in an elaborate process. “That preserves their typical original taste – even under extreme conditions, for example when they are frozen in a food and then boiled during preparation.” They are available for use in various formats: powder or paste, liquid, or as a dry spray. The development team at Firmenich Bjørge Biomarin under the leadership of Karl Inge Slotsvik is constantly searching for new product ideas and application areas. A lot of tests have shown that the natural concentrates don’t only make foods more enjoyable but also have a special health benefit. “Clinical studies have confirmed that marine peptides and other flavour active substances have a positive influence on blood and insulin values, digestion, body weight and muscle functions”, explains Slotsvik. Consumers are changing their consumption

habits. Some people avoid certain foods in order to follow a healthier diet. On the other hand others use additional means such as omega-3 preparations to achieve the same goal. “Our seafood concentrates don’t demand any abstinence, so “Eat less” or “Eat healthier foods” doesn’t have to apply here.” Bjørge Biomarin has belonged to Firmenich since 2002. Firmenich was founded in Geneva (Switzerland) in 1895 and with an annual turnover of 3 billion Swiss francs is today considered to be the world’s largest private company for fragrances and aromas. The company produces in 28 locations and markets its products in over 100 countries. In 2015 Firmenich decided to make the Norwegian branch Bjørge Biomarin the driver in the growing health and wellness market. Since then the company has invested considerable sums in the production of hydrolysed proteins and peptides.

CEO Jan Bjørge and Karl Inge Slotsvik. Firmenich is a purely B2B enterprise which only delivers to other processors but not to retailers and end-users. www.euroﬁshmagazine.com