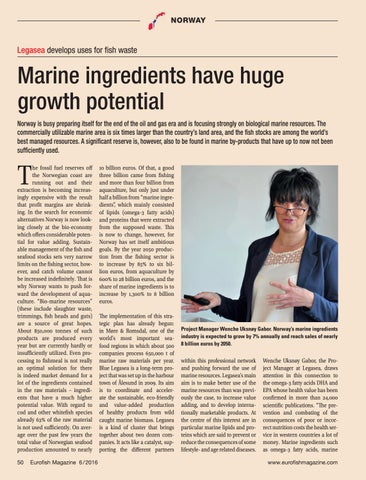 Marine ingredients have huge growth potential Norway is busy preparing itself for the end of the oil and gas era and is focusing strongly on biological marine resources. The commercially utilizable marine area is six times larger than the country’s land area, and the fish stocks are among the world’s best managed resources. A significant reserve is, however, also to be found in marine by-products that have up to now not been sufficiently used.

he fossil fuel reserves off the Norwegian coast are running out and their extraction is becoming increasingly expensive with the result that profit margins are shrinking. In the search for economic alternatives Norway is now looking closely at the bio-economy which offers considerable potential for value adding. Sustainable management of the fish and seafood stocks sets very narrow limits on the fishing sector, however, and catch volume cannot be increased indefinitely. That is why Norway wants to push forward the development of aquaculture. “Bio-marine resources” (these include slaughter waste, trimmings, fish heads and guts) are a source of great hopes. About 850,000 tonnes of such products are produced every year but are currently hardly or insufficiently utilized. Even processing to fishmeal is not really an optimal solution for there is indeed market demand for a lot of the ingredients contained in the raw materials – ingredients that have a much higher potential value. With regard to cod and other whitefish species already 63 of the raw material is not used sufficiently. On average over the past few years the total value of Norwegian seafood production amounted to nearly 50

10 billion euros. Of that, a good three billion came from fishing and more than four billion from aquaculture, but only just under half a billion from “marine ingredients”, which mainly consisted of lipids (omega-3 fatty acids) and proteins that were extracted from the supposed waste. This is now to change, however, for Norway has set itself ambitious goals. By the year 2050 production from the fishing sector is to increase by 85 to six billion euros, from aquaculture by 600 to 28 billion euros, and the share of marine ingredients is to increase by 1,300 to 8 billion euros. The implementation of this strategic plan has already begun: in Møre & Romsdal, one of the world’s most important seafood regions in which about 500 companies process 650,000 t of marine raw materials per year. Blue Legasea is a long-term project that was set up in the harbour town of Ålesund in 2009. Its aim is to coordinate and accelerate the sustainable, eco-friendly and value-added production of healthy products from wild caught marine biomass. Legasea is a kind of cluster that brings together about two dozen companies. It acts like a catalyst, supporting the different partners

within this professional network and pushing forward the use of marine resources. Legasea’s main aim is to make better use of the marine resources than was previously the case, to increase value adding, and to develop internationally marketable products. At the centre of this interest are in particular marine lipids and proteins which are said to prevent or reduce the consequences of some lifestyle- and age related diseases.

Wenche Uksnøy Gabor, the Project Manager at Legasea, draws attention in this connection to the omega-3 fatty acids DHA and EPA whose health value has been confirmed in more than 24,000 scientific publications. “The prevention and combating of the consequences of poor or incorrect nutrition costs the health service in western countries a lot of money. Marine ingredients such as omega-3 fatty acids, marine www.euroﬁshmagazine.com