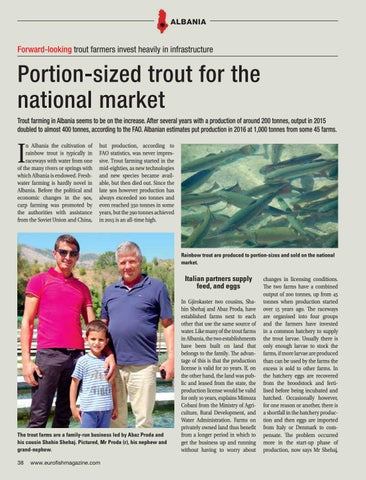 Portion-sized trout for the national market Trout farming in Albania seems to be on the increase. After several years with a production of around 200 tonnes, output in 2015 doubled to almost 400 tonnes, according to the FAO. Albanian estimates put production in 2016 at 1,000 tonnes from some 45 farms.

n Albania the cultivation of rainbow trout is typically in raceways with water from one of the many rivers or springs with which Albania is endowed. Freshwater farming is hardly novel in Albania. Before the political and economic changes in the 90s, carp farming was promoted by the authorities with assistance from the Soviet Union and China,

but production, according to FAO statistics, was never impressive. Trout farming started in the mid-eighties, as new technologies and new species became available, but then died out. Since the late 90s however production has always exceeded 100 tonnes and even reached 350 tonnes in some years, but the 390 tonnes achieved in 2015 is an all-time high.

Rainbow trout are produced to portion-sizes and sold on the national market.

The trout farms are a family-run business led by Abaz Proda and his cousin Shahin Shehaj. Pictured, Mr Proda (r), his nephew and grand-nephew.

In Gjirokaster two cousins, Shahin Shehaj and Abaz Proda, have established farms next to each other that use the same source of water. Like many of the trout farms in Albania, the two establishments have been built on land that belongs to the family. The advantage of this is that the production license is valid for 20 years. If, on the other hand, the land was public and leased from the state, the production license would be valid for only 10 years, explains Mimoza Cobani from the Ministry of Agriculture, Rural Development, and Water Administration. Farms on privately owned land thus benefit from a longer period in which to get the business up and running without having to worry about

changes in licensing conditions. The two farms have a combined output of 200 tonnes, up from 45 tonnes when production started over 15 years ago. The raceways are organised into four groups and the farmers have invested in a common hatchery to supply the trout larvae. Usually there is only enough larvae to stock the farms, if more larvae are produced than can be used by the farms the excess is sold to other farms. In the hatchery eggs are recovered from the broodstock and fertilised before being incubated and hatched. Occasionally however, for one reason or another, there is a shortfall in the hatchery production and then eggs are imported from Italy or Denmark to compensate. The problem occurred more in the start-up phase of production, now says Mr Shehaj,