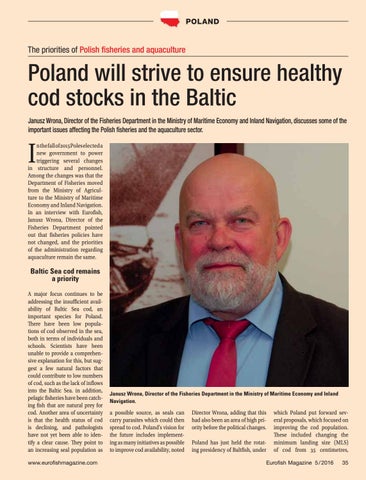 Poland will strive to ensure healthy cod stocks in the Baltic Janusz Wrona, Director of the Fisheries Department in the Ministry of Maritime Economy and Inland Navigation, discusses some of the important issues affecting the Polish ďŹ sheries and the aquaculture sector.

n the fall of 2015 Poles elected a new government to power triggering several changes in structure and personnel. Among the changes was that the Department of Fisheries moved from the Ministry of Agriculture to the Ministry of Maritime Economy and Inland Navigation. In an interview with Eurofish, Janusz Wrona, Director of the Fisheries Department pointed out that fisheries policies have not changed, and the priorities of the administration regarding aquaculture remain the same.

Baltic Sea cod remains a priority A major focus continues to be addressing the insufficient availability of Baltic Sea cod, an important species for Poland. There have been low populations of cod observed in the sea, both in terms of individuals and schools. Scientists have been unable to provide a comprehensive explanation for this, but suggest a few natural factors that could contribute to low numbers of cod, such as the lack of inflows into the Baltic Sea. in addition, pelagic fisheries have been catching fish that are natural prey for cod. Another area of uncertainty is that the health status of cod is declining, and pathologists have not yet been able to identify a clear cause. They point to an increasing seal population as www.eurofishmagazine.com

Janusz Wrona, Director of the Fisheries Department in the Ministry of Maritime Economy and Inland Navigation.

a possible source, as seals can carry parasites which could then spread to cod. Polandâ&#x20AC;&#x2122;s vision for the future includes implementing as many initiatives as possible to improve cod availability, noted

Director Wrona, adding that this had also been an area of high priority before the political changes. Poland has just held the rotating presidency of Baltfish, under

which Poland put forward several proposals, which focused on improving the cod population. These included changing the minimum landing size (MLS) of cod from 35 centimetres,