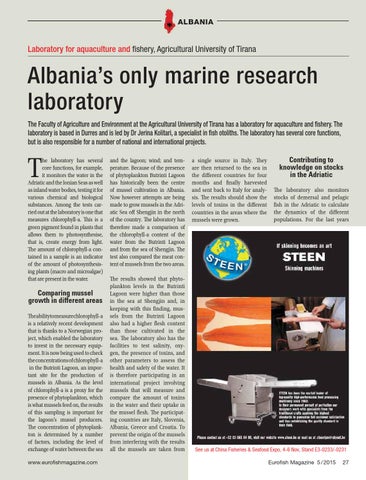 Laboratory for aquaculture and ďŹ shery, Agricultural University of Tirana

Albaniaâ&#x20AC;&#x2122;s only marine research laboratory The Faculty of Agriculture and Environment at the Agricultural University of Tirana has a laboratory for aquaculture and ďŹ shery. The laboratory is based in Durres and is led by Dr Jerina Kolitari, a specialist in ďŹ sh otoliths. The laboratory has several core functions, but is also responsible for a number of national and international projects.

he laboratory has several core functions, for example, it monitors the water in the Adriatic and the Ionian Seas as well as inland water bodies, testing it for various chemical and biological substances. Among the tests carried out at the laboratory is one that measures chlorophyll-a. This is a green pigment found in plants that allows them to photosynthesise, that is, create energy from light. The amount of chlorophyll-a contained in a sample is an indicator of the amount of photosynthesising plants (macro and microalgae) that are present in the water.

Comparing mussel growth in different areas Theabilitytomeasurechlorophyll-a is a relatively recent development that is thanks to a Norwegian project, which enabled the laboratory to invest in the necessary equipment. It is now being used to check the concentrations of chlorophyll-a in the Butrinti Lagoon, an important site for the production of mussels in Albania. As the level of chlorophyll-a is a proxy for the presence of phytoplankton, which is what mussels feed on, the results of this sampling is important for the lagoonâ&#x20AC;&#x2122;s mussel producers. The concentration of phytoplankton is determined by a number of factors, including the level of exchange of water between the sea www.eurofishmagazine.com

and the lagoon; wind; and temperature. Because of the presence of phytoplankton Butrinti Lagoon has historically been the centre of mussel cultivation in Albania. Now however attempts are being made to grow mussels in the Adriatic Sea off Shengjin in the north of the country. The laboratory has therefore made a comparison of the chlorophyll-a content of the water from the Butrinti Lagoon and from the sea of Shengjin. The test also compared the meat content of mussels from the two areas. The results showed that phytoplankton levels in the Butrinti Lagoon were higher than those in the sea at Shengjin and, in keeping with this finding, mussels from the Butrinti Lagoon also had a higher flesh content than those cultivated in the sea. The laboratory also has the facilities to test salinity, oxygen, the presence of toxins, and other parameters to assess the health and safety of the water. It is therefore participating in an international project involving mussels that will measure and compare the amount of toxins in the water and their uptake in the mussel flesh. The participating countries are Italy, Slovenia, Albania, Greece and Croatia. To prevent the origin of the mussels from interfering with the results all the mussels are taken from

Contributing to knowledge on stocks in the Adriatic The laboratory also monitors stocks of demersal and pelagic fish in the Adriatic to calculate the dynamics of the different populations. For the last years