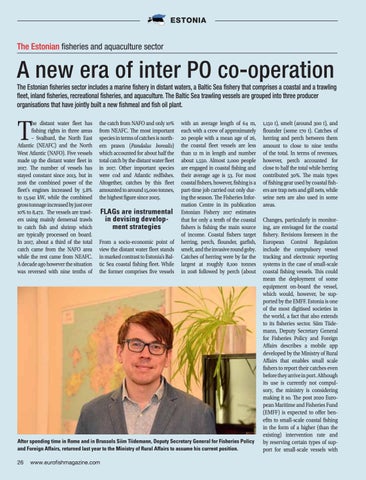 he distant water fleet has fishing rights in three areas â&#x20AC;&#x201C; Svalbard, the North East Atlantic (NEAFC) and the North West Atlantic (NAFO). Five vessels made up the distant water fleet in 2017. The number of vessels has stayed constant since 2013, but in 2016 the combined power of the fleetâ&#x20AC;&#x2122;s engines increased by 5.8ď&#x2122;&#x201A; to 13,941 kW, while the combined gross tonnage increased by just over 10ď&#x2122;&#x201A; to 8,472. The vessels are trawlers using mainly demersal trawls to catch fish and shrimp which are typically processed on board. In 2017, about a third of the total catch came from the NAFO area while the rest came from NEAFC. A decade ago however the situation was reversed with nine tenths of

the catch from NAFO and only 10ď&#x2122;&#x201A; from NEAFC. The most important species in terms of catches is northern prawn (Pandalus borealis) which accounted for about half the total catch by the distant water fleet in 2017. Other important species were cod and Atlantic redfishes. Altogether, catches by this fleet amounted to around 15,000 tonnes, the highest figure since 2005.

with an average length of 64 m, each with a crew of approximately 20 people with a mean age of 26, the coastal fleet vessels are less than 12 m in length and number about 1,550. Almost 2,000 people are engaged in coastal fishing and their average age is 53. For most coastal fishers, however, fishing is a part-time job carried out only during the season. The Fisheries Information Centre in its publication Estonian Fishery 2017 estimates that for only a tenth of the coastal fishers is fishing the main source of income. Coastal fishers target herring, perch, flounder, garfish, smelt, and the invasive round goby. Catches of herring were by far the largest at roughly 8,100 tonnes in 2018 followed by perch (about

After spending time in Rome and in Brussels Siim Tiidemann, Deputy Secretary General for Fisheries Policy and Foreign Affairs, returned last year to the Ministry of Rural Affairs to assume his current position.

1,150 t), smelt (around 300 t), and flounder (some 170 t). Catches of herring and perch between them amount to close to nine tenths of the total. In terms of revenues, however, perch accounted for close to half the total while herring contributed 30ď&#x2122;&#x201A;. The main types of fishing gear used by coastal fishers are trap nets and gill nets, while seine nets are also used in some areas. Changes, particularly in monitoring, are envisaged for the coastal fishery. Revisions foreseen in the European Control Regulation include the compulsory vessel tracking and electronic reporting systems in the case of small-scale coastal fishing vessels. This could mean the deployment of some equipment on-board the vessel, which would, however, be supported by the EMFF. Estonia is one of the most digitised societies in the world, a fact that also extends to its fisheries sector. Siim Tiidemann, Deputy Secretary General for Fisheries Policy and Foreign Affairs describes a mobile app developed by the Ministry of Rural Affairs that enables small scale fishers to report their catches even before they arrive in port. Although its use is currently not compulsory, the ministry is considering making it so. The post 2020 European Maritime and Fisheries Fund (EMFF) is expected to offer benefits to small-scale coastal fishing in the form of a higher (than the existing) intervention rate and by reserving certain types of support for small-scale vessels with