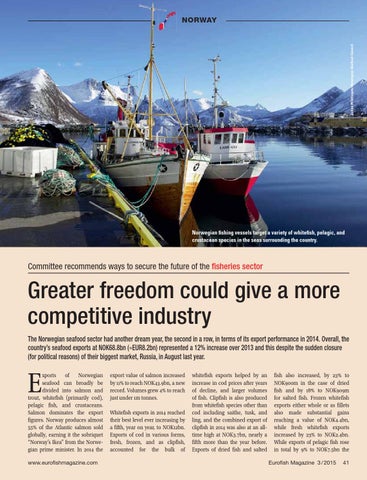 Norwegian fishing vessels target a variety of whitefish, pelagic, and crustacean species in the seas surrounding the country.

Committee recommends ways to secure the future of the ﬁsheries sector

Greater freedom could give a more competitive industry The Norwegian seafood sector had another dream year, the second in a row, in terms of its export performance in 2014. Overall, the country’s seafood exports at NOK68.8bn (≈EUR8.2bn) represented a 12% increase over 2013 and this despite the sudden closure (for political reasons) of their biggest market, Russia, in August last year.

xports of Norwegian seafood can broadly be divided into salmon and trout, whitefish (primarily cod), pelagic fish, and crustaceans. Salmon dominates the export figures. Norway produces almost 55 of the Atlantic salmon sold globally, earning it the sobriquet “Norway’s Ikea” from the Norwegian prime minister. In 2014 the www.eurofishmagazine.com

export value of salmon increased by 11 to reach NOK43.9bn, a new record. Volumes grew 4 to reach just under 1m tonnes. Whitefish exports in 2014 reached their best level ever increasing by a fifth, year on year, to NOK12bn. Exports of cod in various forms, fresh, frozen, and as clipfish, accounted for the bulk of

whitefish exports helped by an increase in cod prices after years of decline, and larger volumes of fish. Clipfish is also produced from whitefish species other than cod including saithe, tusk, and ling, and the combined export of clipfish in 2014 was also at an alltime high at NOK3.7bn, nearly a fifth more than the year before. Exports of dried fish and salted

fish also increased, by 23 to NOK900m in the case of dried fish and by 18 to NOK909m for salted fish. Frozen whitefish exports either whole or as fillets also made substantial gains reaching a value of NOK4.4bn, while fresh whitefish exports increased by 23 to NOK2.4bn. While exports of pelagic fish rose in total by 9 to NOK7.5bn the Eurofish Magazine 3 / 2015

Covering Norway and Russia, this issue also review the Seafood Expo Global (SEG) and the aquaculture section looks at geothermal energy use and organic standards.