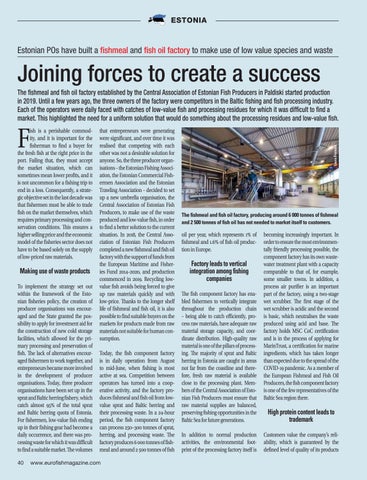 Joining forces to create a success

ish is a perishable commodity, and it is important for the fisherman to find a buyer for the fresh fish at the right price in the port. Failing that, they must accept the market situation, which can sometimes mean lower profits, and it is not uncommon for a fishing trip to end in a loss. Consequently, a strategic objective set in the last decade was that fishermen must be able to trade fish on the market themselves, which requires primary processing and conservation conditions. This ensures a higher selling price and the economic model of the fisheries sector does not have to be based solely on the supply of low-priced raw materials.

Making use of waste products To implement the strategy set out within the framework of the Estonian fisheries policy, the creation of producer organisations was encouraged and the State granted the possibility to apply for investment aid for the construction of new cold storage facilities, which allowed for the primary processing and preservation of fish. The lack of alternatives encouraged fishermen to work together, and entrepreneurs became more involved in the development of producer organisations. Today, three producer organisations have been set up in the sprat and Baltic herring fishery, which catch almost 95% of the total sprat and Baltic herring quota of Estonia. For fishermen, low-value fish ending up in their fishing gear had become a daily occurrence, and there was processing waste for which it was difficult to find a suitable market. The volumes

that entrepreneurs were generating were significant, and over time it was realised that competing with each other was not a desirable solution for anyone. So, the three producer organisations – the Estonian Fishing Association, the Estonian Commercial Fishermen Association and the Estonian Trawling Association – decided to set up a new umbrella organisation, the Central Association of Estonian Fish Producers, to make use of the waste produced and low-value fish, in order to find a better solution to the current situation. In 2018, the Central Association of Estonian Fish Producers completed a new fishmeal and fish oil factory with the support of funds from the European Maritime and Fisheries Fund 2014–2020, and production commenced in 2019. Recycling lowvalue fish avoids being forced to give up raw materials quickly and with low-price. Thanks to the longer shelf life of fishmeal and fish oil, it is also possible to find suitable buyers on the markets for products made from raw materials not suitable for human consumption. Today, the fish component factory is in daily operation from August to mid-June, when fishing is most active at sea. Competition between operators has turned into a cooperative activity, and the factory produces fishmeal and fish oil from lowvalue sprat and Baltic herring and their processing waste. In a 24-hour period, the fish component factory can process 250–300 tonnes of sprat, herring, and processing waste. The factory produces 6 000 tonnes of fishmeal and around 2 500 tonnes of fish

The ﬁshmeal and ﬁsh oil factory established by the Central Association of Estonian Fish Producers in Paldiski started production in 2019. Until a few years ago, the three owners of the factory were competitors in the Baltic ﬁshing and ﬁsh processing industry. Each of the operators were daily faced with catches of low-value ﬁsh and processing residues for which it was difﬁcult to ﬁnd a market. This highlighted the need for a uniform solution that would do something about the processing residues and low-value ﬁsh.

oil per year, which represents 1% of fishmeal and 1.6% of fish oil production in Europe.

Factory leads to vertical integration among fishing companies The fish component factory has enabled fishermen to vertically integrate throughout the production chain – being able to catch efficiently, process raw materials, have adequate raw material storage capacity, and coordinate distribution. High-quality raw material is one of the pillars of processing. The majority of sprat and Baltic herring in Estonia are caught in areas not far from the coastline and therefore, fresh raw material is available close to the processing plant. Members of the Central Association of Estonian Fish Producers must ensure that raw material supplies are balanced, preserving fishing opportunities in the Baltic Sea for future generations. In addition to normal production activities, the environmental footprint of the processing factory itself is

becoming increasingly important. In order to ensure the most environmentally friendly processing possible, the component factory has its own wastewater treatment plant with a capacity comparable to that of, for example, some smaller towns. In addition, a process air purifier is an important part of the factory, using a two-stage wet scrubber. The first stage of the wet scrubber is acidic and the second is basic, which neutralises the waste produced using acid and base. The factory holds MSC CoC certification and is in the process of applying for MarinTrust, a certification for marine ingredients, which has taken longer than expected due to the spread of the COVID-19 pandemic. As a member of the European Fishmeal and Fish Oil Producers, the fish component factory is one of the few representatives of the Baltic Sea region there.

High protein content leads to trademark Customers value the company’s reliability, which is guaranteed by the defined level of quality of its products