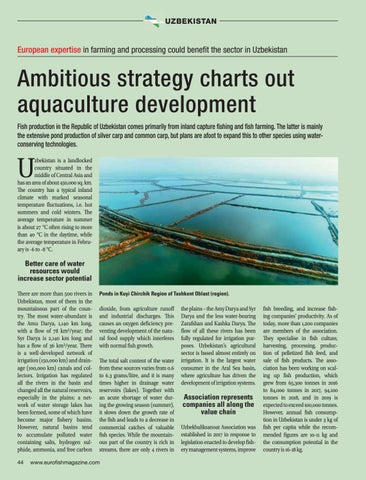 Ambitious strategy charts out aquaculture development Fish production in the Republic of Uzbekistan comes primarily from inland capture ﬁshing and ﬁsh farming. The latter is mainly the extensive pond production of silver carp and common carp, but plans are afoot to expand this to other species using waterconserving technologies.

zbekistan is a landlocked country situated in the middle of Central Asia and has an area of about 450,000 sq. km. The country has a typical inland climate with marked seasonal temperature fluctuations, i.e. hot summers and cold winters. The average temperature in summer is about 27 °C often rising to more than 40 °C in the daytime, while the average temperature in February is -6 to -8 °C.

Better care of water resources would increase sector potential There are more than 500 rivers in Uzbekistan, most of them in the mountainous part of the country. The most water-abundant is the Amu Darya, 1,140 km long, with a flow of 78 km3/year; the Syr Darya is 2,140 km long and has a flow of 36 km3/year. There is a well-developed network of irrigation (150,000 km) and drainage (100,000 km) canals and collectors. Irrigation has regulated all the rivers in the basin and changed all the natural reservoirs, especially in the plains; a network of water storage lakes has been formed, some of which have become major fishery basins. However, natural basins tend to accumulate polluted water containing salts, hydrogen sulphide, ammonia, and free carbon 44

dioxide, from agriculture runoff and industrial discharges. This causes an oxygen deficiency preventing development of the natural food supply which interferes with normal fish growth. The total salt content of the water from these sources varies from 0.6 to 6.3 grams/litre, and it is many times higher in drainage water reservoirs (lakes). Together with an acute shortage of water during the growing season (summer), it slows down the growth rate of the fish and leads to a decrease in commercial catches of valuable fish species. While the mountainous part of the country is rich in streams, there are only 4 rivers in

the plains – the Amy Darya and Syr Darya and the less water-bearing Zarafshan and Kashka Darya. The flow of all these rivers has been fully regulated for irrigation purposes. Uzbekistan’s agricultural sector is based almost entirely on irrigation. It is the largest water consumer in the Aral Sea basin, where agriculture has driven the development of irrigation systems.

Association represents companies all along the value chain Uzbekbaliksanoat Association was established in 2017 in response to legislation enacted to develop fishery management systems, improve

fish breeding, and increase fishing companies’ productivity. As of today, more than 1,200 companies are members of the association. They specialise in fish culture, harvesting, processing, production of pelletized fish feed, and sale of fish products. The association has been working on scaling up fish production, which grew from 65,300 tonnes in 2016 to 84,000 tonnes in 2017, 94,100 tonnes in 2018, and in 2019 is expected to exceed 100,000 tonnes. However, annual fish consumption in Uzbekistan is under 3 kg of fish per capita while the recommended figures are 10-11 kg and the consumption potential in the country is 16-18 kg.